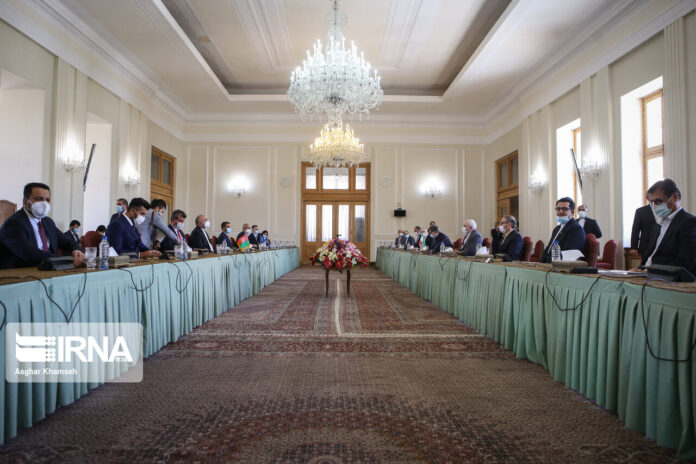 Mohammad Hanif Atmar, the honourable caretaker of Ministry of Foreign Affairs of the Islamic Republic of Afghanistan, visited Tehran at the head of a high-ranking delegation on June 21, 2020, for an official two-day visit. During the trip, Mr. Atmar and the accompanying delegation held meetings with the Islamic Republic of Iran’s Minister of Foreign Affairs, Secretary of the Supreme National Security Council, Minister of Interior, Minister of Energy, and Minister of Cooperatives, Labour, and Social Welfare.

In the meetings, the two sides discussed the expansion of relations between the two countries in various fields within the framework of eight working committees, including the committees on comprehensive document, legalization of residence of nationals, border cooperation, labour, water, cultural cooperation, energy, and health.

1. In order to institutionalize and organize the bilateral relations, the two sides agreed on the necessity of proceeding with the negotiations to finalize the comprehensive document on strategic cooperation between the two countries and preparing the document for signature by the Presidents within three months.

3. The two sides emphasized the need to reduce violence in Afghanistan with the purpose of building trust and creating a positive atmosphere in order to launch the intra-Afghan negotiations as soon as possible, achieve a lasting ceasefire, and establish sustainable peace.

4. Considering the significance of regional and international consensus on the establishment of peace and security in Afghanistan, the two sides stressed the need to strengthen the regional and international cooperation and consultations and activate the capacities available in the region with the purpose of facilitating the negotiations and supporting the Islamic Republic of Afghanistan’s establishment. As a result, they agreed about the necessity for the formation of a regional initiative pivoting on Afghanistan and participation of the neighbouring countries and partnership of the other influential countries and the role of the United Nations in supporting the intra-Afghan peace process.

5. The two sides touched on the good cooperation and coordination between the two countries in the international circles, the issues of mutual interest, and the common concerns, including human rights and protecting the rights of nationals, and stressed the need to proceed with the cooperation in future.