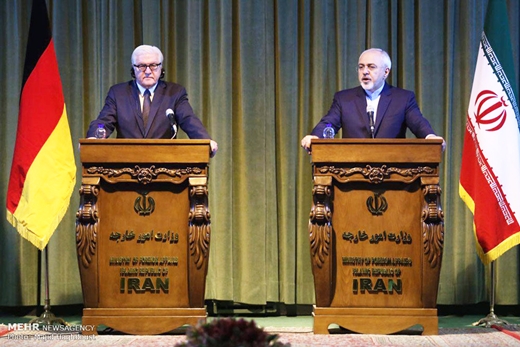 We are not after eliminating Saudi Arabia, and won't allow Saudi Arabia to eliminate Iran from the region, Zarif said.

Speaking at a joint presser with his German counterpart Frank-Walter Steinmeier in Tehran on Saturday, Zarif said Iran is after good neighborly ties with its neighbors.

“Security must be provided for all as we all live next to each other in the region,” he said.

“We are not after eliminating Saudi Arabia, and, on the other hand, do not allow Saudi Arabia to eliminate Iran from the region,” he said.

Saudi Arabia’s “attempt to eliminate Iran has led to bloodshed and the stoking of confrontations in the region, and this has to stop,” he said.

Responding to a question on Syria, Zarif said the Islamic Republic is ready to cooperate with all concerned governments to resolve the Syrian crisis. He said Iran believes that measures taken by the Russian government in Syria are in line with fighting the Takfiri IS terrorist group.

He said military operations against IS are only one dimension of the fight against the terrorist group, adding, among other measures, financial support for IS should stop.

The Iranian top diplomat also said that foreign intervention in Syria should serve the purpose of expediting conflict resolution there.

Such an outcome, he said, has so far proven elusive due to some countries’ insistence on excluding certain individuals from Syria’s political future.

He reiterated that Iran has never had and will never have a nuclear weapons program.

Zarif said Tehran-Berlin ties are “age-old” and are based on “mutual respect and common interest.”

He said the ties “can serve as a decent model for Iran’s relations with other European countries.”

Steinmeier, for his part, said the two sides to the recent agreement between Iran and P5+1 should build trust in order to reduce potential tensions.

The German top diplomat arrived in Tehran on Saturday on a two-day visit, a first such visit by a German foreign minister in 12 years.

Following the press conference, the officials proceeded to attend a core group meeting of the Munich Security Conference (MSC).

Chaired by Wolfgang Ischinger, the chairman of the MSC, and the Iranian foreign minister, the meeting is to address the implementation of the July 14 nuclear agreement between Iran and six other countries, Iran’s regional role, the security architecture in the Middle East as well as the economic and energy policy implications of the Vienna agreement.

The MSC has been serving as an international platform for dialog on foreign and security policy since its foundation in 1963.