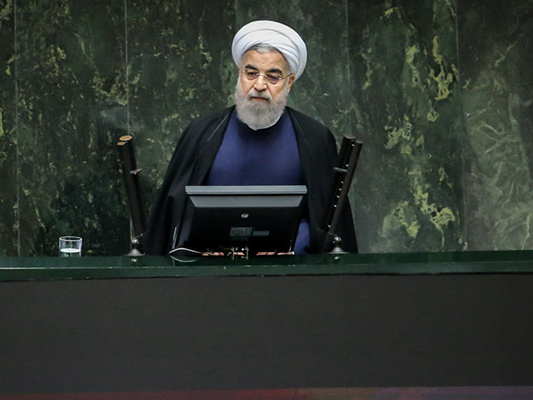 “We can remain in the deal or walk out, but there is also a third path. In case Europe fails to meet its commitments, we will announce a new method that is the third path,” he said.

Rouhani said he has told his French counterpart Emmanuel Macron in a Monday phone conversation that Tehran will resort to that third option in case the EU fails to do its commitments.

The Iranian president did not give any detail about the option, and told the lawmakers he would do so in case it plans to tread on the path.

Back in early May, the US walked out of the deal and since then is working to re-impose anti-Iran US sanctions suspended under the deal.

Washington is also pushing the world to cut trade with Iran and stop purchasing oil from the country. The EU has offered Iran a support package to compensate for the US pull-out.

Currency Fluctuations Have No Economic Root

The president, who had been summoned to the parliament to respond to the lawmakers’ questions about the conditions of the Iranian economy, defended his government’s economic record, saying it worked hard to improve people’s livelihood.

Rouhani, who championed the nuclear pact during his first tenure in office, said the nuclear deal produced tangible benefits for the Iranian nation, allowing the government to boost economic growth.

However, he said that in the past eight months, changes in the country’s conditions worsened the economic situation.

Rouhani suggested the recent dramatic decline in the value of rial has its roots in a change in people’s perceptions, and not economic reasons.

The plunge in the value of rial has soared the prices of imported consumer goods and depressed some markets in the past few months.

Earlier this month, the value of rial against the US dollar passed 100,000 in the free market, prompting the government, judiciary and the parliament to take immediate measures to stop the plunge in the value of rial.

Iranian Economy Not in ‘Crisis’

Rouhani said the country’s economy is not facing a crisis, urging officials to refrain from conveying such a message to the people.

“Do not say that we are facing a crisis. We are sometimes on the edge of damage, but not in a crisis,” he said.

The president said all branches of power will join hands to overcome challenges, under the guidance of the Leader of Islamic Revolution Ayatollah Seyyed Ali Khamenei.

Although Rouhani put up strong defence of his government’s record, lawmakers were largely unconvinced by his arguments.

An electronic voting after Rouhani’s speech showed lawmakers were not convinced by his answers to four of their five questions, namely increased smuggling, high rate of unemployment, the flagging economy and the drop in rial’s value.

The lawmakers were only relatively convinced by Rouhani’s remarks on the anti-Iran banking sanctions.

Eighty members of the Iranian parliament, who were unhappy about the government’s economic performance, tabled a motion in an open session on August 1 to question Rouhani about his administration’s economic policies and its response to the country’s economic hardships.

Rouhani’s failure in appealing to the parliament puts him in risk of impeachment, taking into account that Rouhani’s political opponents are threatening to remove the president.

On Monday, there were reports some lawmakers are pushing for impeachment of Minister of Roads and Urban Development Abbas Akhoundi.