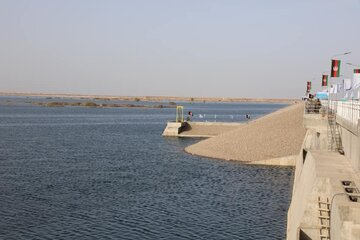 “The government of the Islamic Republic of Iran welcomes the Afghan president’s remarks about turning water into an issue for cooperation between the two countries, and expressed Tehran’s preparedness in that regard,” Khatibzadeh said on Wednesday.

Asked by reporters about the remarks made in connection with the opening of Kamal-Khan dam in Afghanistan, Khatibzadeh said, “The Hirmand River has a defined legal regime, and according to an agreement signed between the two countries in 1972, Iran’s water share is fully defined and the Afghan government is committed to the water share rights.”

“Of course the issue of the nature’s water share and protecting the lives of Hamun lakes is a separate one, which has long been a subject of negotiation with the Afghan government,” he added.

“Fortunately, the significance of Hamun Lake and the necessity of providing it with its water share is considered by the Afghan government. The drying up of the Hamun lakes would cause serious damages, including sandstorms, to the people on both sides of the border,” he added.

Khatibzadeh said the issue of developing Sistan region is an issue to which the government of the Islamic Republic of Iran has always paid attention.
“Naturally, the required water needs to be provided for the development plans in appropriate ways. In this regard, since many years ago, the government has been studying and implementing various plans including the transfer of desalinated water from Sea of Oman, use of deep water resources, transfer of water from other internal resources, and most importantly the implementation of water consumption optimization plans,” he noted.