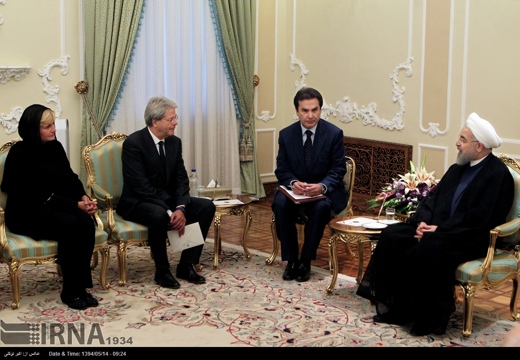 Pointing to age-old relations between Iran and Italy, the president said at a meeting with two Italian ministers there are no obstacles in the way of fostering mutual cooperation.

President Hassan Rouhani said Wednesday that Iran would do its best for establishment of peace and stability in the region.

“Following the nuclear agreement reached between Iran and P5+1, Tehran is feeling a heavy burden on its shoulder.” President Rouhani added.

Touching on the European Union’s huge capacity, Italy in particular, to foster relations with Iran, President Rouhani reiterated that the transfer of capital and technology to Iran to be followed by joint exports to regional markets are the priority of Iran for reinforcing economic relations with European countries.

Pointing to age-old relations between Iran and Italy, he added there are no obstacles in the way of fostering mutual cooperation.

“Iran and Italy can open a new chapter in political, economic, cultural, scientific and tourism arenas,’ he added.

President Rouhani underlined that the ground is fully prepared for attracting foreign investment in the fields of energy, banking, insurance, industry, transportation and health.

For his part, Foreign Minister Gentiloni said his country is keen on making investment in Iranian projects.

Submitting an official invitation letter from Italian Prime Minister Matteo Renzi to President Hassan Rouhani, the top diplomat underlined the necessity of efforts to boost of all-out ties between Iran and Italy.

Iran plays a key role in establishment of peace and stability in the region and the international community needs Iran’s help, Renzi said in the invitation letter.

President Rouhani thanked the Italian prime minister for inviting him over to Rome, saying that he will travel to Italy in proper time.

The Italian foreign minister declared his country’s preparedness to invest in and transfer technology to Iran in all fields including the oil and gas industry.