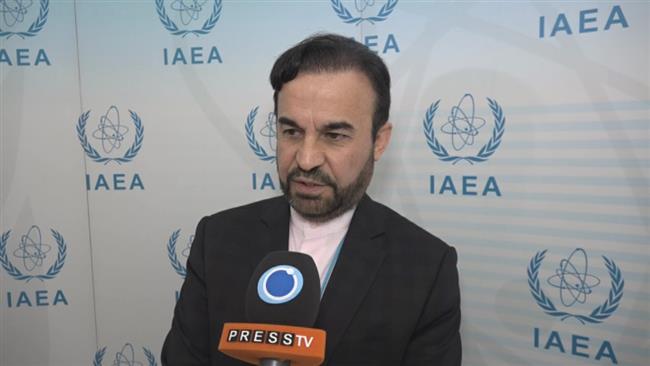 Iran will begin to implement the Additional Protocol according to the Joint Comprehensive Plan of Action, said the Iranian ambassador to the International Atomic Energy Agency.

Iran says it will start implementing the Additional Protocol to the Nuclear Non-Proliferation Treaty (NPT) under the terms of its agreement with six world powers.

Iran will begin to implement the Additional Protocol “according to the Joint Comprehensive Plan of Action (JCPOA),” Iran’s Ambassador to the International Atomic Energy Agency (IAEA) Reza Najafi told Press TV in Vienna, Austria, on the sidelines of an IAEA Board of Governors meeting on Tuesday.

The Additional Protocol requires member states to provide an expanded declaration of their nuclear activities and grant the agency broader rights of access to their nuclear sites.

Beyond the Additional Protocol and the safeguards agreement, he said, Iran will take “[a] few” transparency measures related to “uranium mines and centrifuges workshops.”

He further noted that the measures will be taken for a “limited period of time” and will be “just for the sake of transparency.”

Najafi also pointed to the IAEA’s commitments regarding the confidentiality of information on Iran’s nuclear program, saying, “Till now what we have witnessed is that the agency is fulfilling its obligation and regarding the preparatory process… we witnessed the support and I believe that overwhelming support of members of the IAEA, especially those who were involved in the process, is a good sign and we try to be optimistic and we will wait to see when the implementation day comes.”

Najafi further noted that Iran is “in close contact with the agency” about the documents clarifying past and present outstanding issues pertaining to its nuclear program.

Also on Tuesday, IAEA Director General Yukiya Amano said in a statement to the Board of Governors that Iran’s recent agreement with the nuclear monitoring agency did not “compromise” the agency’s standards “in any way.”

In line with a roadmap signed between Iran and the IAEA in mid-July, Tehran provided the agency with explanations in writing and related documents on August 15 in order to clarify past and present outstanding issues pertaining to its nuclear program, Amano said.

As agreed in the roadmap, all activities are set to be completed by October 15, the IAEA chief said. He added that he would present his final assessment of Iran’s nuclear activities to the Board of Governors by December 15.

Amano also expressed the IAEA’s readiness to “undertake the necessary work” regarding JCPOA, noting that Iran and P5+1 would set up a joint panel to monitor the implementation of JCPOA.