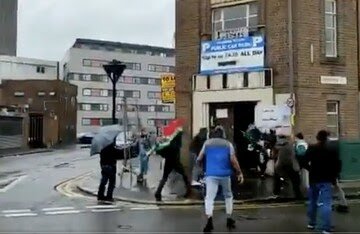 The Ministry of Foreign Affairs of the Islamic Republic of Iran has summoned the British ambassador to Tehran on Saturday, June 19, 2021, to protest against the problems created for the Iranian voters in Britain, the Ministry's spokesman Saeed Khatibzadeh said.

In a statement on Saturday, Khatibzadeh said, “Following the disruption of the Iranian presidential election in some cities of Britain including London and Birmingham, which resulted in insults against the voters and the election staff and the beating of one of the voters by anti-democracy and counterrevolutionary terrorist elements, British Ambassador to Tehran Rob Macaire was summoned to the Ministry of Foreign Affairs today by the Foreign Minister’s Assistant and Director General of the Foreign Ministry’s Western Europe Department.”

In this meeting, Khatibzadeh said, the British ambassador received Iran’s strong protest at these riotous and terrorist acts.

“The British ambassador was told that the government and police of that country have failed to fulfil their duties to ensure the security of the polling stations and the voters,” Khatibzadeh said.

The Director General of the Iranian Foreign Ministry’s Department for Western Europe has also reminded the British envoy that democracy materialises at the ballot boxes not in the moves of a few number of rioters on the streets.

“In the meeting, strong criticism was levelled at the naughty and divisive performance of the UK-based Persian media, including BBC Persian and Iran International, which tried to promote a boycott of election, encourage people to attend street protests, and disrupt the process of election with their programs and types of news making. It was emphasised that such measures that run counter to democracy and encourage riotous moves will remain in the memory of Iranian people,” the spokesman added.

The British envoy, in turn, said he will convey the protest to London.