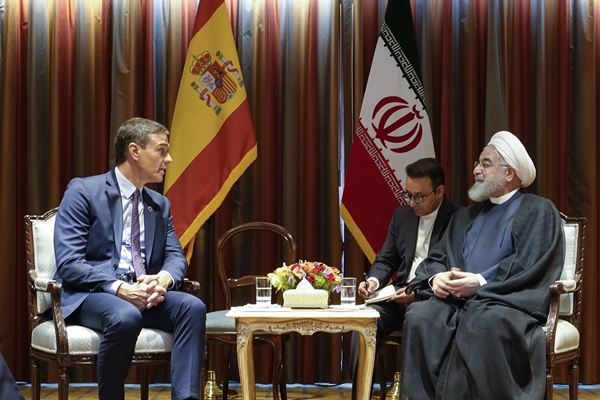 In a meeting in New York, Iranian President Hassan Rouhani and Prime Minister of Spain Pedro Sanchez called for the expansion of relations between Tehran and Madrid, particularly in technology and tourism sectors.

President Rouhani and Prime Minister Sanchez met on the sidelines of the 74th annual session of the United Nations General Assembly in New York on Tuesday.

In the meeting, held at the residence of the Iranian president, they discussed the ways to promote the relations between Iran and Spain, as well as President Rouhani’s new initiative for preserving security in the Persian Gulf region, known as the “Hormuz Peace Endeavour.”

Highlighting Iran and Spain’s capabilities and extensive potential, president of the Islamic Republic of Iran emphasized the need for efforts to strengthen the bilateral ties.

“The current sanctions and bullying by the US administration will break up in the long term, but the age-old and historical relations between the friendly countries, such as Iran and Spain, must remain solid,” Dr. Rouhani added.

The Iranian president also called for the promotion of scientific, academic and technological relations and for the enhancement of cooperation between Iran and Spain in the biotechnology and nanotechnology fields.

Spanish Prime Minister Sanchez, for his part, expressed regret at the suffering of the Iranian nation under the current unilateral sanctions, reaffirmed his country’s support for the JCPOA, and underlined Spain’s determination to further broaden relations with Iran.

Sanchez also pointed to President Rouhani’s “Coalition of Hope” initiative, noting, “We have known you as the man of peace during the past years, and I hope that this initiative would help reduce tensions in the region.”