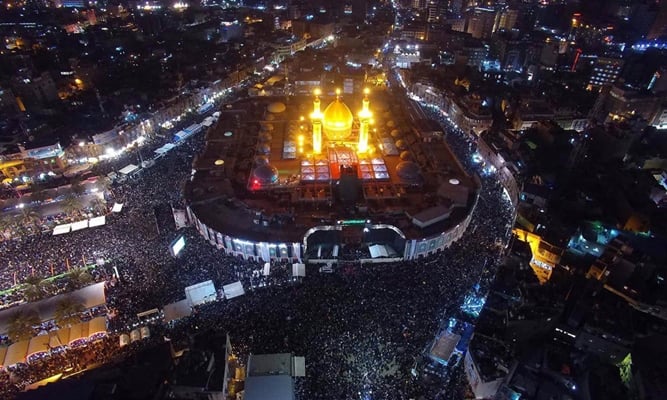 Iran’s Interior Minister says the world’s mainstream media are not willing to cover the world’s largest religious gathering, Arba’een, which is held to mark the fortieth day after the martyrdom anniversary of the third Shiite Imam.

Abdolreza Rahmani Fazli said the foreign media’s indifference to the gathering shows that they are worried about the impact of the great march of Arba’een.

He stressed that Ashura (the day Imam Hussein was martyred some 14 centuries ago) and the uprising of Imam Hussein (AS) do not belong to a particular religion, but belong to the entire world, because the third Shiite Imam sacrificed his life and the lives of his companions for Islam and humanity.

The Iranian minister also underlined that the number of foreign pilgrims attending Arba’een shows the world is moving towards Islam and the uprising of Imam Hussein.

“We must have suitable infrastructure to make their trip easier. People start this difficult trek because they believe in the ideals of Imam Hussein. We must use all the capacities to show the different aspects of such belief to the people around the world,” pointed out Rahmani Fazli.

Speaking at a meeting near the border crossing with Iraq, he noted that “services provided for pilgrims this year are very good and extensive in comparison to the past four years, and with the implementation of the plans, we can offer more services at the borders in the coming years.”

Meanwhile, Iran’s Minister of Culture and Islamic Guidance announced one million and 700 thousand people have registered for the great march of Arba’een.

Seyyed Abbas Salehi made the statements upon his arrival in Ilam city near the border with Iraq.

All the paths leading to the holy city of Karbala, in which the shrine of Imam Hussein is located, are filled with millions of people who form the largest march in the world.

The route from Najaf to Karbala, which is the main path of the Arba’een march, is about 80 kilometres. It is believed that the population would increase as of Sunday. This year’s march seems to be the most magnificent one over previous years.

The Arba’een pilgrimage is the world’s largest public gathering that is held every year in Karbala, Iraq. This pilgrimage is held at the end of the 40-day mourning period following Ashura, the religious ritual for the commemoration of the martyrdom of Prophet Mohammad’s grandson Hussein ibn Ali about 14 centuries ago. During this event the pilgrims make their journey to Karbala on foot.

The ritual is an overwhelmingly powerful display of belief and solidarity.