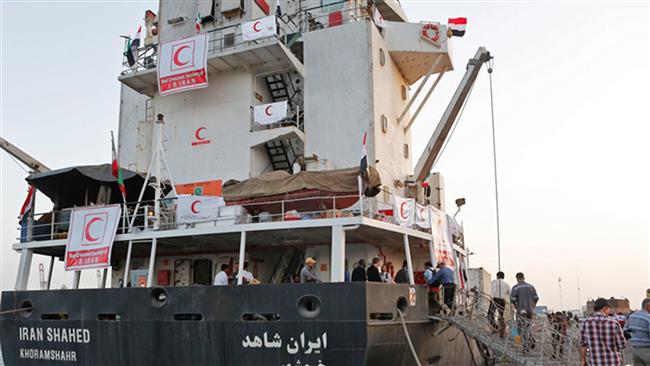 Iran’s ship, carrying 2,500 tons of basic supplies for the war-hit Yemenis as well as international journalists, doctors, and anti-war activists, has arrived in Djibouti.

An Iranian ship carrying humanitarian aid for the war-ravaged Yemenis has arrived in Djibouti.

Iran’s Ambassador to Djibouti and Ethiopia Ali Bahraini welcomed the people on board the aid ship, dubbed Nejat (Rescue), upon their arrival in the African country on Friday night.

This is the first Iranian relief cargo for the Yemeni people which has arrived in Djibouti, Bahraini told reporters, adding that the first plane carrying humanitarian aid destined for the crisis-hit Arab country is also scheduled to land in the African country within hours.

We maintain constant contact with the United Nations and the World Food Programme in a bid to dispatch humanitarian aid to the Yemeni port city of Hudaydah in the quickest time possible, the Iranian official stated.

Meanwhile, Iran’s Red Crescent Society Secretary General Ali Asghar Ahmadi said that Iranian officials are “assessing the situation” and will decide on the continuation of the ship’s voyage later on Saturday.

On Wednesday, Iranian Deputy Foreign Minister for Arab and African Affairs Hossein Amir-Abdollahian said that the Iranian ship has been dispatched under “full coordination with the UN” and would head for nearby Djibouti, where the world body has established a delivery hub.

The aid ship, which left the Iranian port city of Bandar Abbas on May 11, is carrying 2,500 tons of basic supplies including flour, rice, medicine, and water. Several international journalists, doctors, and anti-war activists are also aboard the ship.

Saudi Arabia started its military aggression against Yemen on March 26 — without a UN mandate — in a bid to undermine the Houthi Ansarullah movement, which currently controls the capital, Sana’a, and other major provinces, and to restore power to Yemen’s fugitive former President Abd Rabbuh Mansour Hadi, who is a staunch ally of Riyadh. 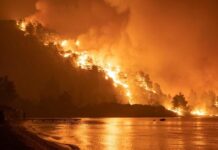