Iran Says Red Sea No Longer Safe for US Navy 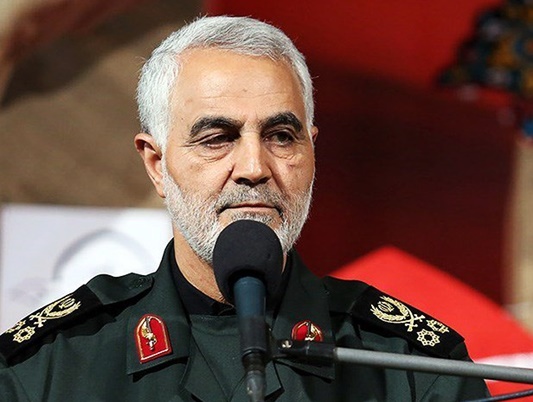 IRGC Quds Force Commander Major General Qassem Soleimani has harshly responded to the US President’s anti-Iran threats amid an increasingly escalating war of words between the two sides.

General Soleimani on Thursday lashed out at Donald Trump for his recent tweet in which he threatened Iran with “consequences the likes of which few throughout history have ever suffered before”.

“This is the way people talk in a cabaret and casino. A cabaret owner talks to the world like this,” he said, stressing that it is beneath the dignity of Iranian President Hassan Rouhani to respond to such remarks.

“Our president will not give you an answer [as your remarks are very worthless], but I will answer you as a soldier,” he noted, adding that the US must face the IRGC Quds Force and its commander.

He underscored that although a year has passed since Trump has taken office, his language is still like that of gamblers and cabaret owners. When he talks to European countries, China, Russia, Korea and the whole world, it seems a gambler is talking, and this destroys the dignity of a nation.

“Hey gambler Trump! I stand alone against you. The IRGC Quds Force stands against you. We [Iranian nation] have passed many hard times. You may start the war, but we will end it up, go and ask your predecessors, commanders, and security forces. So do not threaten to kill us. We are ready to stand against you,” he added.

“Remember that we are close to you way more than what you think. Remember that the one who stands against you is me [and Quds Force], not all the Armed Forces. Of course, you know Iran’s power in asymmetric warfare,” reiterated General Soleimani.

He further noted that the Red Sea, which used to be a safe place, is no longer safe for Americans today. “I would like to advise Trump to learn a lesson from the ex-presidents of the United States and use their experiences.”

General Soleimani’s comments on the Red Sea came as Riyadh has temporarily suspended all oil shipments through the Bab el-Mandeb Strait after Yemen’s Houthi Ansarullah movement launched retaliatory attacks on a Saudi warship and a vessel operated by the Riyadh-led coalition waging war the Arabian Peninsula state.

US Begged Iran for Help in Iraq

General Soleimai further noted, “What was it that you could do during the past 20 years but you didn’t? You went to Afghanistan with dozens of tanks and hundreds of advanced helicopters, and committed crimes. What the hell were you doing with 110,000 troops between 2001 and 2018 [there]? And today you are begging the Taliban to come to the negotiating table.”

“Never forget that you were looking for diapers for your soldiers, and now you are threatening us?! What the hell did you do during the 33-day war? Wasn’t that just accepting [Lebanese] Hezbollah’s conditions for the end of the war?”

“The US has turned many weddings into mourning ceremonies and plundered many villages and cities, but failed in Afghanistan. More than 60% of the casualties were civilians.”

“Ask your commanders in Iraq who sent a person to me and asked us to use our influence so their troops would not be attacked by Iraqi militants for a few months and get out of the country.”

The IRGC Quds Force Commander also highlighted that the United States has committed the most horrible crimes in Iraq and Afghanistan, saying that “Abu Ghraib prison incident is enough to disgrace you forever.”

“You could not win a $2 trillion war in Yemen. A movement in Yemen is standing against you, but it has won the war against your most advanced combat capabilities. What did you get in these four years? You caused Riyadh and Saudi Arabia to come under fire, where a mortar had not been shot in a hundred years there. And now you are threatening us?”

“Trump! You should not threaten our nation, and you should not insult our president. You must know what you are saying.”

Elsewhere in his remarks, General Soleimani said, “Today you have gathered the rubbish of Iran, the MKO terrorist cult, to prove what?”

He went on to say that the Islamic Republic has learned very good experiences from eight years of holy defence [against Iraq], underlining that today, the Iranian society society faces widespread hostilities because of its valuable achievements.

“There existed sanctions in all periods, but we’ve been successful in countering them. During the eight-year war we stood against the countries that represented the arsenal of the world, but we were sanctioned and could not buy a simple engine. They tested the worst poisons that existed in European countries on our fronts and committed horrible crimes. But the Islamic Republic of Iran won this unequal war, heroically defeated the enemy, and captured thousands.”