Iran Says Prepared to Deal with All Kinds of Enemy Plots 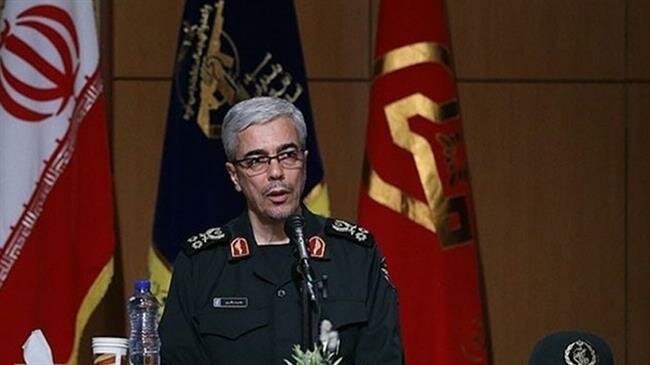 Chairman of the Chiefs of Staff of the Iranian Armed Forces Major General Mohammad Baqeri says the Islamic Republic has mustered sustainable and strong deterrence power to ward off plots by enemies who think about any form of aggression against the country.

General Baqeri made the remarks while addressing a national gathering of commanders and staff officials of Iran’s Islamic Revolution Guards Corps (IRGC) on Monday.

“Praise be to God, at the present time, a sustainable and strong form of deterrence has been created in the face of enemy’s plot to carry out any act of aggression against the Islamic Iran and enemies have understood that the Islamic Iran enjoys the readiness, determination and courage and will not hesitate to defend its ideals, land and people,” he said.

The top Iranian commander noted, “At the present time, the Islamic Republic of Iran, as a superior regional power, recognizes its responsibility for maintaining regional security and stability and plays a basic role in this regard… it does not think about … waging war and sowing insecurity and seeks calm and tranquility through regional cooperation.”

Baqeri pointed to great achievements made by the IRGC’s Aerospace Division and said the reinforcement of the country’s defense, missile and drone capabilities, showing off the vigilant and firm preparedness of the country’s armed forces to counter the enemy’s threats and plots, the destruction of the terrorists’ bastions in different regional areas and the downing of an intruding US drone demonstrated only parts of the might of the IRGC and the Islamic establishment.

In June, Iran shot down an intruding American spy drone in the southern coastal province of Hormozgan.

The IRGC said in a statement that the US-made Global Hawk surveillance drone was brought down by its Air Force near the Kouh-e Mobarak region — which sits in the central district of Jask County — after the aircraft violated Iranian airspace.

Meanwhile, Iran’s Defense Minister Brigadier General Amir Hatami also said on Sunday that the Islamic Republic will give a strong response to the slightest act of aggression.

“We will deal severely with the slightest act of aggression and if such behavior is repeated, our response will certainly be stronger,” Hatami said in an address to National Conference on Jihad and Resistance in Tehran.