An Iranian deputy foreign minister says diplomatic efforts are being made to allow the foreign businesspeople to travel to Iran in conformity with the health protocols amid the coronavirus concerns, noting that nearly all border crossings, except the common border with Turkmenistan, are open at present.

In remarks on Sunday, Iranian Deputy Foreign Minister for Economic Diplomacy Gholamreza Ansari said the Iranian diplomatic missions abroad are holding consultations with the host countries to pave the way for the resumption of business travels to Iran in the current circumstances.

While the outbreak of the novel coronavirus has hampered travels between the countries, Iran has launched talks with the neighbouring countries to normalize the situation for the business people intending to cross the border, he noted, saying the country’s foreign missions have been provided with a series of protocols formulated by the Health Ministry covering the air, sea and land travels.

“We have asked our missions to start negotiations with the local authorities on the ways the two sides can figure out to allow for safe travels by the individuals,” Ansari added.

He further noted that nearly all of the Iranian borders, except for the common border with Turkmenistan, remain open.

“Turkmenistan has shut its borders with all countries, including the neighbours and non-neighbours, due to the coronavirus outbreak. As the Turkmen officials claim, there has been no case (of coronavirus) in that country, so they have closed almost all borders in order to protect themselves against the coronavirus harms,” the Iranian deputy minister noted.

Although the trade activities and the shipment of commodities are going on at Iran’s northern, southern, eastern and western borders, the business processes could not rely only upon the freight operations, but the individuals and merchants should be also able to make trips, Ansari added.

He finally noted that business people and truck drivers from Afghanistan and Pakistan are allowed to enter Iran by observing a series of health protocols and regulations, adding, “We seek to reach agreements on frameworks for the same situation with the other neighbours as well, and to create conditions for the travels by individuals with strict border control.” 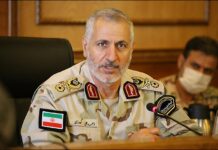