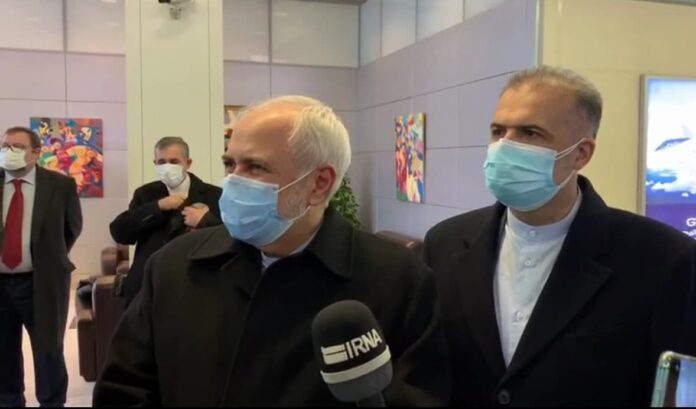 Iranian Foreign Minister Mohammad Javad Zarif says his visit to Moscow would involve negotiations on a range of issues, such as the strategic ties between Iran and Russia and the need to coordinate policies as the new US president has taken office.

Speaking to reporters upon arrival in Moscow on Tuesday, Foreign Minister Zarif said Iran and Russia have strategic relations and need to hold regular and constant negotiations in various conditions.

“We always hold important talks with the Russian friends in various conditions. Considering that the issue of Karabakh and the subject of six-party or five-party cooperation will be a significant topic in this visit, it has a new feature that we will be pursuing the Caucasus region matter specifically. The international situation is also special as Trump has left office. We and Russia need to coordinate our stances in such circumstances,” he added.

The top Iranian diplomat said even the outbreak of the coronavirus pandemic has not prevented the contacts between Tehran and Moscow.

He further hailed the Russian president’s efforts to halt the armed clashes in the Nagorno-Karabakh region in Iran’s neighborhood, stressing that implementation of the agreements achieved after the war “is important to create common interests among the regional countries, particularly in the transit sector and participation in and cooperation for progress.”

Pointing to the “very good” negotiations held with the president of the Republic of Azerbaijan in the first leg of his tour of the Caucasus, Foreign Minister Zarif said he will proceed with the talks in Russia and in the upcoming visits to Armenia, Georgia and Turkey.

He also noted that the initiative for six-party regional cooperation is another topic that will be discussed during his stay in Moscow, adding, “The international conditions, the JCPOA, and the necessity to implement the commitments by all parties are the common subjects that we have had with Russia. We will discuss them as well.”

“The other regional conditions, such as Afghanistan, Syria, Yemen, and other regional discussions are always on the agenda of our negotiations. I hope we’d take the time to discuss all of these subjects today,” the senior Iranian diplomat concluded.