Iran Ready to Work with All Muslim States to Defend Al-Quds: Rouhani to OIC 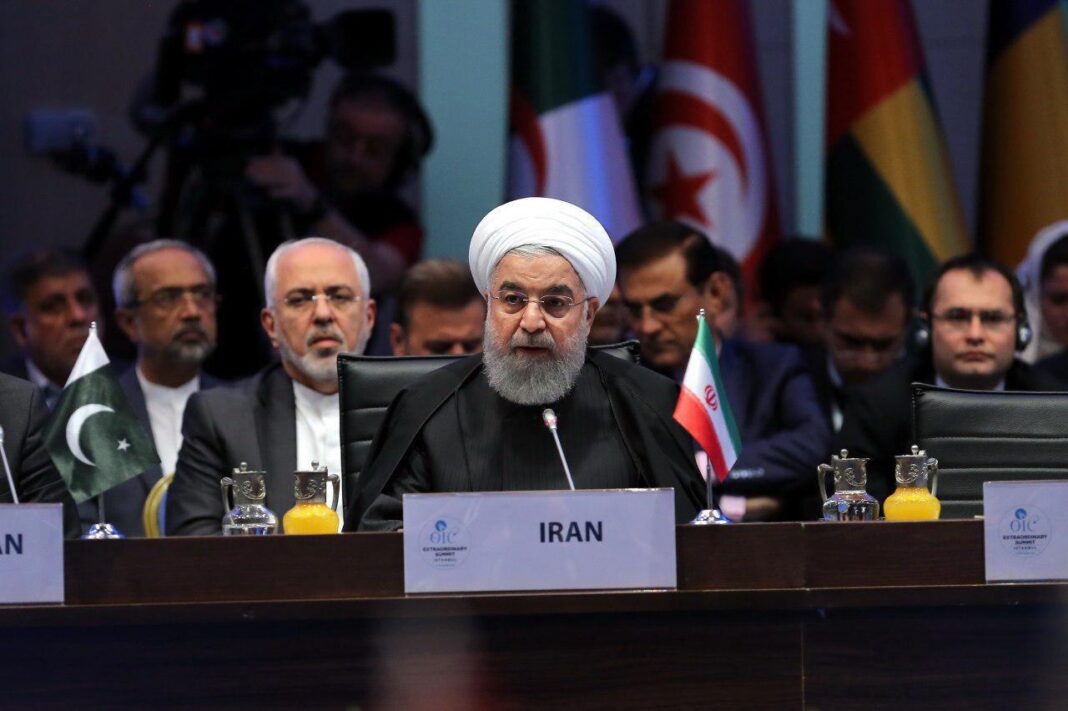 Iranian President Hassan Rouhani has expressed Tehran’s preparedness to cooperate with all Muslim countries, without any preconditions, to defend Palestine and Jerusalem al-Quds.

Speaking at the extraordinary summit of the Organisation of Islamic Cooperation (OIC) in Istanbul on Wednesday, the President said, “The Islamic Republic of Iran stands ready to cooperate with each one of the Muslim countries to defend the holy Quds without any reservation or pre-condition”.

The president’s speech is as follows:

The Almighty God is exalted as he took His Servant by night from Masjid al-Haram to Masjid al-Aqsa, whose surroundings are blessed, to show him of our signs. Indeed, the Almighty God hears and sees.

Your Excellency Mr Erdogan, the Honourable President of Turkey,

I would like to begin with appreciating the efforts of my dear brother His Excellency Recep Tayyip Erdogan for organizing this very significant meeting. We have gathered here to exchange views on the appalling tragedy and the old wound of the Muslim Ummah in the last one hundred years which began with the Balfour conspiracy and is now experiencing a new chapter with the incorrect and unlawful promise of the US President to move the American Embassy to the holy city of al-Quds.

Today we speak about Quds which is the first Qiblah of Muslims and the third holiest Islamic shrine and is used to recognize the identity and credibility of Palestine. The uprising of the tireless people of Palestine during the past several days against the United States and the Zionist occupiers once again demonstrated that Palestinians would not pin their hope on empty plans and instead are insisting on their righteous demands.

The Muslim states fortunately were quick in reacting to the approach of the US administration towards the Quds City. And the formation of this summit indicates the correct interpretation by Muslims of the incorrect act of the US President.

Through every possible means, we should join hands to prevent the enforcement of such an unintelligent US act. However, we should also investigate what elements and reasons emboldened the US President to take such a rude and sacrilegious decision.

I believe that other than any other reason, the efforts of some countries to establish relations and even consultation and coordination with the Zionist regime have incited such a decision.

Instead of countering the threats of the Zionists, some countries in our region are aligned with the US and Zionists to prescribe the fate of Palestine—If such prescriptions are taken, the Zionists would permanently dominate the Palestinians.

During the past several decades, the Zionist regime has been responsible for the killing and displacement of Palestinians while disrespecting Islamic sanctity in Palestine. In committing all such crimes and murders, the United States has been supporting the Zionists with its veto power in the Security Council of the United Nations and has spared no effort in supplying all kinds of destructive weapons to the Zionist regime. Unfortunately, the United States was chosen as an arbitrator for years in negotiations. Or they sought the support of the US and relied on it for mediation.

The United States has never been an honest mediator. And it will never be. The recent act by the US administration made it clear for the people who wished a positive role by the US in resolving the issue of Palestine that the US is only seeking to secure the maximum interests of the Zionists and consider no respect for the legitimate demands of Palestinians.

In order to counter such oppressive and low-minded measures, it is necessary to take lessons from the past. Therefore, I take the opportunity to propose the following actions:

1- It is necessary for this summit to strongly condemn the recent decision by the US administration to recognize al-Quds as the capital of the Zionist regime and move its embassy to the holy Quds.

2- Under the present circumstances, it is necessary for the Muslim world to get united against the Zionist regime. If we suffer from differences amongst ourselves over some issues, we should not be divided on defending the holy Quds and the Palestinian cause. All the problems of the Muslim world can be resolved through dialogue. It is only through Islamic unity that we can better support the rights of the Islamic Ummah and the holy Quds.

3- The US administration should be aware of the reality that the world of Islam does not remain indifferent towards the fate of Palestine and the holy Quds. And that ridiculing international approvals and ideas of nearly all the international community on the issue of Palestine would have political repercussions and costs.

4- It is imperative on the Muslim states to harmonize their protest to the recent US decision in their talks with America’s partners especially European countries and emphasize on the necessity to stand against such a decision.

5- The issue of Palestine should once again be placed top on the agenda of the Muslim world. With the defeat of Daesh [ISIS] in Iraq and Syria and the necessity of continuing the fight against other terrorist groups, we should not forget the dangers of the Zionist regime including its nuclear warheads which is a threat to the whole world.

6- The United Nations and particularly the Security Council and its General Assembly can and should play a key role under such circumstances to express their opposition to the recent US decision. It is necessary that diplomatic missions of Muslim states in the United Nations actively participate in the discussions.

7- The movements of the Zionist regime should be constantly monitored and the OIC should hold sessions wherever appropriate to take necessary decisions at the ministerial or heads of state level.

In conclusion, the Islamic Republic of Iran stands ready to cooperate with each one of the Muslim countries to defend the holy Quds without any reservation or pre-condition.