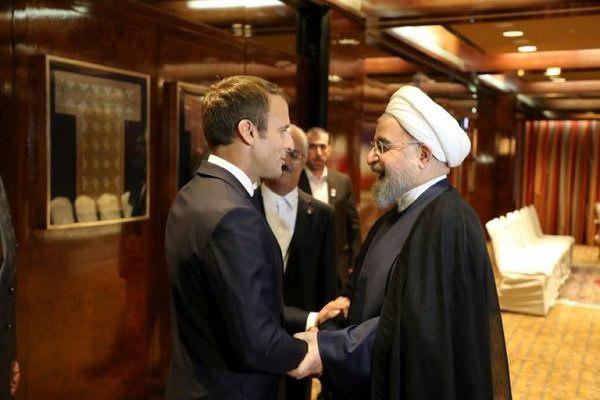 Iranian President Hassan Rouhani says Iran and the EU member states have already established ‘very good’ cooperation on regional issues and added the cooperation can play a key role in restoration of peace and security to the region.

In a Sunday phone conversation with his French counterpart Emanuel Macron, President Rouhani said the Islamic Republic of Iran is determined to establish a strong relation with France based on the historical and friendly ties between the Iranian and French nations.

“Iran is completely ready to strengthen its relations with France in all economic, cultural and political fields,” he said.

President Rouhani then referred to the upcoming visit of his French counterpart to Iran and said “we welcome the visit and maintain that Tehran-Paris cooperation can play a role in resolving bilateral, regional and international problems.”

The Iranian president then said Yemen is suffering from drought, chronic and infectious diseases in addition to the relentless airstrikes by Saudi Arabia and added “Iran expects the EU, especially France, to step into the fray and help the innocent people of Yemen.”

He noted that today Yemen is the scene of war crimes and noted those countries providing the Saudi-led coalition with modern weapons should be held accountable for the catastrophe there.

President Rouhani also called for preserving peace and stability of Lebanon and expressed hope all Lebanese parties play their role in holding a fair election through close cooperation.

He then expressed Iran’s complete readiness to establish multi-lateral cooperation with other countries to provide Syrian people with humanitarian aid.

Rouhani further underlined that negotiation between Iran and the EU doesn’t cover the Iran nuclear deal.

Rouhani once again called on all sides to remain committed to the JCPOA and thanked France for its positive stance towards the nuclear deal.

He also referred to some media reports on efforts to hold a new round of talks for a ‘successor deal’ to the JCPOA and said “seven countries sat for talks, signed a deal and had the UN Security Council to approve it in 2015. So far, Iran has completely fulfilled its commitments under the JCPOA but unfortunately the US always seeks to hamper its implementation.”

For his part, French president expressed his country’s interest in strengthening the bond of friendship with Iran and said Paris would do whatever in its power to preserve the JCPOA.

“We have explicitly announced the necessity of preserving the nuclear deal with Iran. I’ve always underlined this fact that we are not after new rounds of talks on the JCPOA. We are interested in holding talks with Iran over other issues,” he said.

President Macron then said Iran and France shoulder a heavy responsibility towards the regional developments and added cooperation between the two sides is necessary when it comes to resolving some regional issues like Syria and Lebanon crises.

The French president also voiced his country’s interest in pressing ahead with a plan to restore peace and stability to Syria and called for Iran’s partnership.

He also expressed hope to hold talks with Iranian officials as soon as possible.

During the talks the presidents of Iran and France called for strengthening of bilateral ties, vowing to focus their efforts at serving the two sides’ interests.

They also urged an immediate peace in Syria and expressed their preparedness to devise a multi-lateral plan to this end.

The two presidents also tasked their foreign ministers with preparing a draft plan to pave the way for sending humanitarian aid to the people of Syria as the first step of restoring peace to the war-torn country.