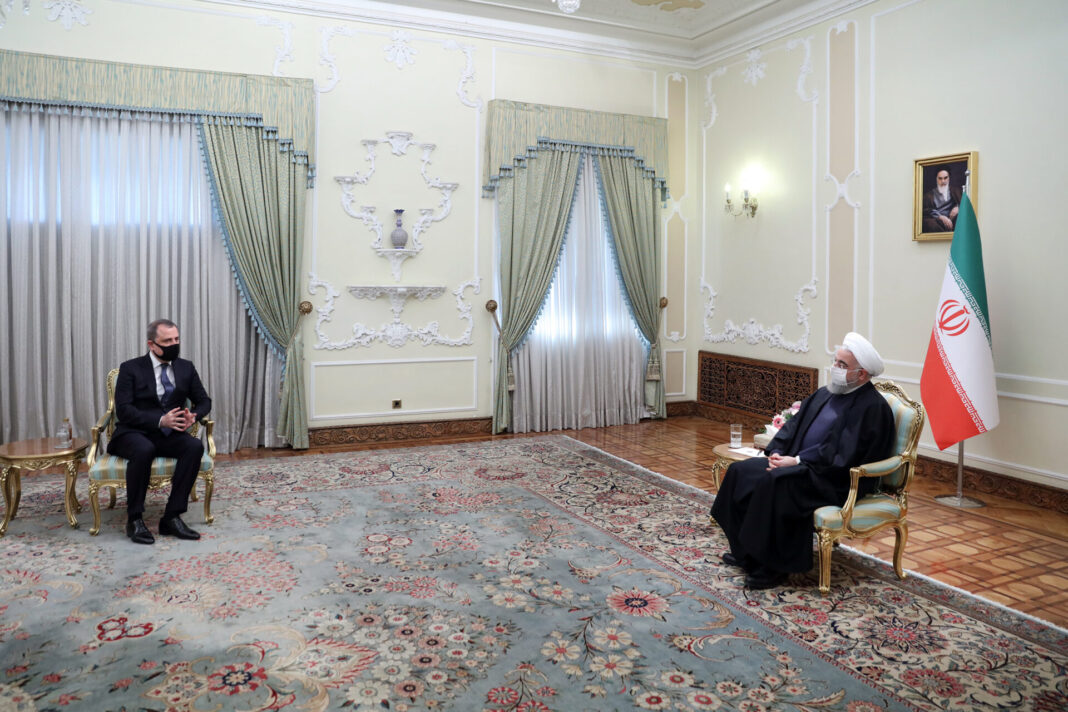 Iranian President Hassan Rouhani has expressed the country’s readiness to play a role in maintaining a ceasefire between the Republic of Azerbaijan and Armenia and to take part in the process of reconstruction in the recently-liberated Azeri lands.

In a meeting with Foreign Minister of the Republic of Azerbaijani Jeyhun Bayramov, held in Tehran on Wednesday, President Rouhani highlighted Iran’s clear policies on the Nagorno-Karabakh dispute and its support for the territorial integrity of Azerbaijan Republic.

The president also expressed satisfaction with the cessation of a recent war between Baku and Yerevan, the liberation of occupied Azeri territories, and the establishment of a ceasefire.

Pointing to Iran’s proposed plan for the settlement of the Nagorno-Karabakh conflict and deployment of special envoys to Russia, the Republic of Azerbaijan and Armenia, President Rouhani voiced the Islamic Republic’s readiness to play a “constructive role” in maintaining the truce between Baku and Yerevan and ensuring stability in the region.

Iran is also ready to take part in the process of reconstruction of the newly-freed Azeri lands, the president added.

“Considering the neighborliness of the two countries and the existing facilities in Iran, Iran’s participation and partnership in the reconstruction of the regions harmed by the Karabakh war would benefit the both nations,” President Rouhani stated.

Hailing the brotherly and friendly ties between Tehran and Baku, the president stressed the need to take advantage of the common border to promote the economic and trade cooperation.

“The Islamic Republic of Iran is determined to expand relations with the Republic of Azerbaijan, and we hope that the bilateral relations would further grow given the opportunity provided by the new international conditions,” President Rouhani noted.

The Iranian president also noted that termination of US President Donald Trump’s term and formation of a new US administration would create better conditions for cooperation among the countries.

President Rouhani further called for the rapid implementation of the agreements that Iran and the Republic of Azerbaijan have signed in the past, such as a railroad project linking Rasht to Astara.

The stage is set for Iran and Azerbaijan to carry out the joint projects that have been already agreed upon, like the Khoda-Afarin dam and the construction of a power plant, the president added, urging closer cooperation between the two neighbors in the industrial, scientific, and pharmaceutical sectors.

For his part, the Azeri foreign minister praised Iran for supporting his country’s territorial integrity.

The Republic of Azerbaijan considers Iran as a good friend and neighbor, as the Azeri president and officials are resolved to boost ties with Iran in all fields, Foreign Minister Bayramov said.

Pointing to the recent liberation of occupied Azeri territories and revival of 132 kilometers of common borderline with Iran, the senior Azeri diplomat said Azerbaijan-Iran boundaries are “border of friendship and development”.

“We believe that revival of these borders could create new cooperation projects for the two countries,” he added.

Stressing the need for the enhancement of political, economic and trade ties between Baku and Tehran, Bayramov expressed hope that the joint projects would be immediately implemented under the new international conditions and the removal of obstacles caused by the US sanctions.