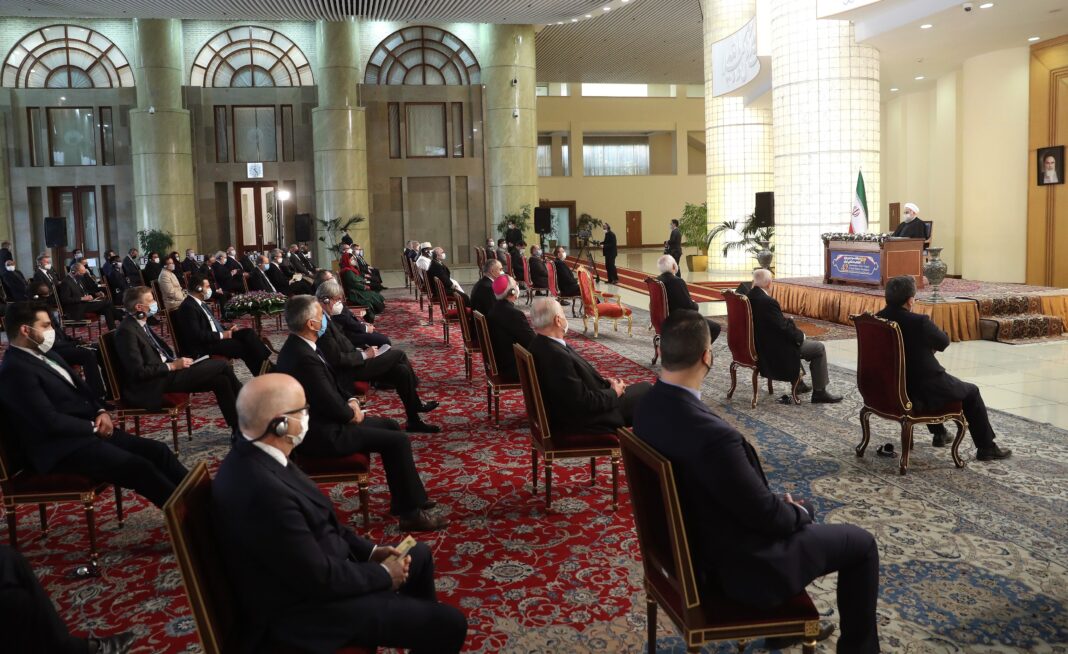 Iranian President Hassan Rouhani says the Islamic Republic is prepared to sit for talks with all countries in the region in order to settle regional problems and issues.

“Iran is ready to talk with all countries in the region and its neighbours, especially the Persian Gulf littoral countries, from Iraq to the six southern countries in accordance with UN Security Council Resolution 598, and settle regional problems and issues,” President Rouhani said on Tuesday.

Speaking in a meeting with ambassadors of foreign countries on the eve of the 42nd anniversary of the victory of the Islamic Revolution, President Rouhani said regional problems must be resolved by regional countries.

“Our region is very sensitive and influential in the world. We believe that the sensitive region of the Middle East must enjoy security, peace and stability. During these 42 years, we have been asked for help everywhere in the region, especially by our neighbours,” the president noted.

“Wherever terrorism was observed in our region, we rushed to the help of the nation that was attacked by terrorists. Iraq, Syria, Lebanon and Afghanistan are witnesses to this,” he added.

President Rouhani then criticized the West’s support for Saudi Arabia’s war on Yemen, and said, “Why did major powers, the United States and the European countries, donate money and weapons to a country that is conducting an act of aggression against the oppressed people of Yemen, and many of these countries continue their assistance today? Who is responsible for all the killings, famine and crimes in Yemen?”

“Who gave this region to the terrorists for years? Our nation must not be held accountable for all the incidents we witnessed in the region, because it has always been a defender of the right alongside the nations and the governments that asked us for help, and we have always fought terrorism,” said Rouhani.

President Rouhani said the Iranian nation is a victim of terrorism and weapons of mass destruction and chemical weapons.

“Martyr Qassem Soleimani was the one who went to the aid of Iraq … from the first day and fought the terrorists, and in Iraq his friend was Abu Mahdi al-Muhandis. These loved ones were assassinated by the United States at the explicit order of Trump. Who should be held responsible for this assassination?”

“The courts of Iran and Iraq and the international courts should not remain silent in the face of this crime and should do their best against these criminals,” he added.

‘Iran Not to Take First Step on JCPOA’

President Rouhani further referred to the US withdrawal from the 2015 nuclear deal and the European countries’ failure to meet their obligations under the Joint Comprehensive Plan of Action (JCPOA) as the reason for Iran’s decision to reduce its commitments.

He stressed that Iran is ready to fulfill all its obligations on the day the United States returns to its full obligations. “Today no one should expect Iran to take the first step.”

The president emphasised that as soon as the P5+1 members fulfill all their obligations, they should know that we will fulfill our obligations the next hour.

“Iran has proved that if it signs and accepts something, it will stick to its signature, commitment and agreement with all its heart, and this is one of the great honours of our nation.”

President Rouhani said that over time, since 2015, Iran has complied with all its commitments within the framework of the JCPOA, adding, “This has been confirmed 15 times by the International Atomic Energy Agency.”

Rouhani added, “Even in 2017, when the then US government was speaking about withdrawing from the agreement, and finally in 2018 when it withdrew from it and imposed sanctions against Iran, we waited a year and fulfilled all our obligations in that period of time.”

“The past year has been difficult for all nations of the world due to the outbreak of coronavirus and COVID-19, but it has been more difficult for our nation because all nations were provided the necessary medical equipment, food, medicine and vaccines to use, they had access to their money, except for Iran, whose financial resources could not be accessed because of the oppressive, illegal US sanctions.”

“COVID-19 was a great test for humanity, cooperation and helping each other around the world, and the Trump administration failed in it,” he said.

Rouhani added, “To date, the new US administration has not taken appropriate actions, at least in relation to the Iranian nation and government, on the issue of Coronavirus.”

In the coming months, our people will use the domestically-produced vaccine,” the President said, adding that “We believe we should all stand together on important human and global issues.”

The President further referred to the 42nd anniversary of the victory of the Islamic Revolution, and said, “February 11th is a very important and historic day for us and a day when the Iranian nation was able to achieve victory with unity, solidarity and sacrifice against a regime armed to the teeth and fully supported by the United States and some other major countries.”

Rouhani emphasised, “This day is happy for us because of independence and happy for the world because Iran began to have democracy, republic and Islam within the framework of its culture.”

The President added, “Since 42 years ago until today, the Islamic Republic has called for peace, stability, negotiation and achieving friendship with different countries, although in these 42 years two wars were imposed on us. One war by Saddam and one war by Trump, but we resisted both aggressions with resistance and patience, and we won both wars.”