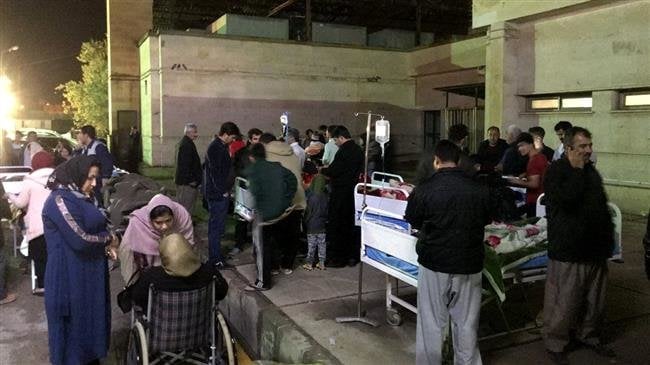 Iran’s president Hassan Rouhani has called for all-out efforts to provide assistance to those affected by a powerful earthquake in western Kermanshah Province, which left over 700 people injured.

The temblor measuring 6.4 on the Richter scale hit near the city of Sarpol-e Zahab at around 20:07 local time on Sunday at a depth of seven kilometers, according to University of Tehran’s Institute of Geophysics.

In a phone conversation with Kermanshah Governor Houshang Bazvand on Monday, Rouhani said relief efforts must be stepped up to deal with the problems facing the quake-hit people and provide temporary shelters for them.

He also appreciated the affected people’s patience, assuring them that officials are following up on the efforts to address the situation.

Bazvand said 729 people had been wounded in the earthquake, 700 of whom had received treatment for minor injuries, while 18 others are still at hospitals.

No fatalities have been reported in the incident, he said, noting that there are no electricity and gas outages.

The governor also said that 13 groups had been working on the scene to assess the amount of the material damage.

He further stressed that 31 villages are grappling with water turbidity, but tankers have been deployed to the region to provide people with drinking water.

So far, over 160 aftershocks have been recorded since Sunday’s earthquake, which was also felt in Iraq and its semi-autonomous Kurdistan region.

Last November, a 7.3-magnitude quake struck Kermanshah, killing at least 620 people and injuring more than 12,000 others. It was Iran’s deadliest earthquake in more than a decade.