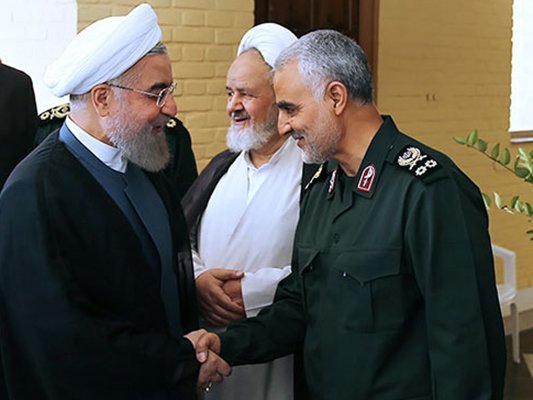 In a message on Tuesday, President Rouhani praised General Soleimani for his endeavours and services. The text of the president’s message was read out at a conference held in recognition of the top general’s services. What follows is the text of the message as reported by Mizan News Agency:

Iran’s checkered history has seen great heroes who created unique scenes of epic and triumph in battlefronts. Islamic Iran’s contemporary history is marked by the emergence of brave men who create epic while enjoying high moral values. Under the aegis of divine blessings and victory and thanks to the purification of their souls and obeying the Velayat-e Faqih, they are down-to-earth and good-tempered when rubbing shoulders with the faithful and are tough and robust in confronting those seeking domination. It is they who have secured a place in the hearts of freedom-seekers and the oppressed around the world.

The martyrs of the Holy Defence era, who have a lofty status, the honourable defenders of holy sites, high-spirited and indefatigable disabled war veterans, and patient ex-prisoners of war are the flag-bearers of this move. Major General Qassem Soleimani, the top commander who has brought honour upon Islam, and the one who has fought in the path of God, defended the Iraqi and Syrian armies and people at a very sensitive juncture in the history of Iran and the world by making pure struggles as part of efforts to save the lives and honour of Muslims and people’s sanctities. His move was aimed at rooting out the wicked tree of ISIS, and amounted to a great service to the nations in the region and to humanity.

I regard the holding of the conference as the right opportunity in line with safeguarding and promoting the values of devotion, resistance and martyrdom, and hereby appreciate the successful and lasting efforts made by the commander of the Quds Force of the IRGC, and ask Almighty God to bestow prosperity, dignity and victory upon this dear man and all those who fight and struggle in the path of God.