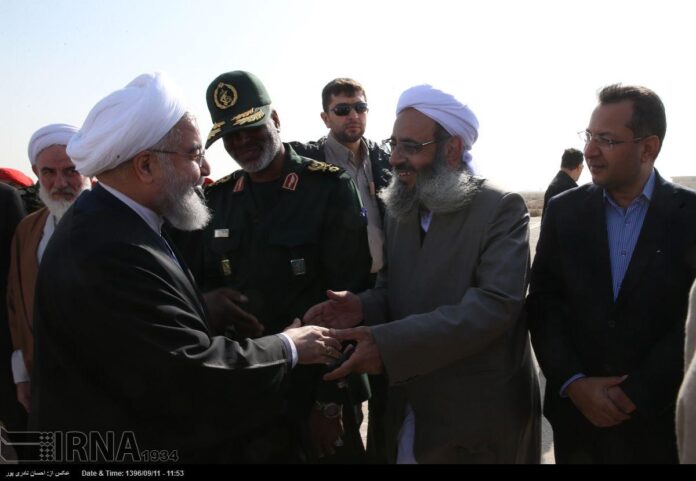 Iranian President Hassan Rouhani says all Muslim countries must stand together and be united, stressing that the Islamic Republic will always help Muslims throughout the region.

“We love Prophet Mohammed (PBUH). Our guidance book is the holy Quran and our only way of salvation is maintaining unity, solidarity and brotherhood. We have one Qibla, one prophet and one book, and we all believe in ethics of prophet Mohammed (PBUH). All the Sunnis and Shiites love the Prophet,” Rouhani noted, calling for further unity among Muslim nations in the region.

He made the remarks in an address to a large group of Iranian people in the Sunni-majority province of Sistan and Baluchestan.

“At a time when the region was devoured by tribal and religious conflicts and wars, the brave Iranian nation including Shiites and Sunnis from across the country maintained their unity and kept faith while the terrorists were penetrating into all other countries except Iran,” Rouhani said on Saturday.

Islam in Iran has never had a relationship with violence, and people in this land have never provided an opportunity for the spread of violence and terrorism, he added.

Rouhani also expressed satisfaction with the victory of regional people over terrorism with the help of their military forces and friendly countries saying that the United States and the Zionist regime had a sinister plan for the region.

“It was not expected that ISIS would soon be eradicated. ISIS was designed for the whole Mideast, and it was supposed to spill over from Iraq and Syria to the whole Central Asia, Iran and other regions. In this way, they wanted to present a negative image of Islam in order to strengthen Israel in the region, so as to strengthen the position of enemies in the region as well. However, the vigilant nations of the region could foil their plots and stand up against global arrogance.”

Rouhani went on to say that “we are happy that the main bases of ISIS in the region have been destroyed. We hope that the roots of violence and terrorism in this region will be eradicated as soon as possible.”

Iranian president further noted that [people of] Sistan and Baluchestan by preserving unity have played their role of guarding Iran’s borders in the best way. He further added that [the people of Sistan and Baluchestan] at all times, including the Islamic Revolution, the 8-year war against Iraq (known as holy defence), and very recently, in the aftermath of the earthquake in Kermanshah, rushed to help their compatriots to become a symbol of unified Iran.

Rouhani expressed satisfaction with his visit to the great land of Sistan and Baluchestan and its capital city Zabol saying throughout the history of Iran and the history of the Islamic Revolution, the people of this province have always shouldered the responsibility of guarding the borders of Iran and Islam.

He also stressed that Islam and Farsi language have been able to find their way to the subcontinent and Bengal from Sistan and Baluchestan.

“Although Sistan and Baluchestan, apparently, has religious and ethnic diversity, but in fact all sects come from a single solid entity called Islam, Prophet Muhammed (PBUH) and the Holy Quran. All ethnicities also originate in Iran, and this is an honour that we are all Iranians and Muslims.”

Rouhani heading a high-ranking delegation arrived in Sistan and Baluchestan Province on Saturday to inaugurate development projects and attend meetings with provincial officials. Upon his arrival at Zabol Airport, Rouhani was welcomed by governor general of the province, Zahedan Friday prayer leader and provincial members of the parliament. During his first provincial visit since the beginning of his second term in office, the president is scheduled to inaugurate a number of projects through video conference and to meet university students