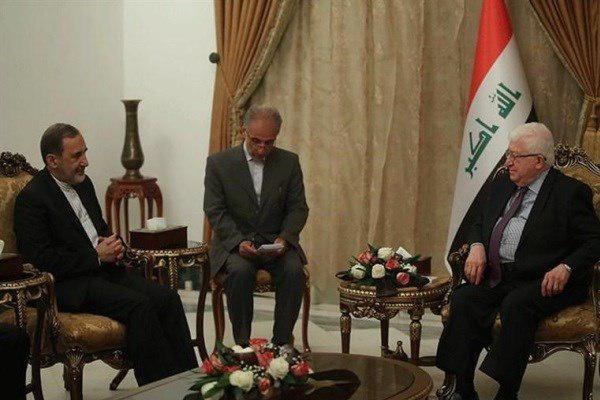 A top aide to the Leader of Iran’s Islamic Revolution says Tehran will never withhold any effort to enhance Iraq’s national unity, and is prepared to enhance ties between Iraq’s central government and Kurdistan Regional Government

In a Sunday meeting with Iraqi President Fuad Masum in Baghdad, Ali Akbar Velayati said “the Islamic Republic of Iran will do whatever in its power to remove grudges between Iraq’s central government and the KRG and to improve their ties.”

According to a Farsi report by IRIB, Velayati then praised the late Kurdish politician and former Iraqi President, Jalal Talabani, for his “key role in the Iraqi nation’s war for independence.”

The top aide to Iran’s Leader also noted that Iraqi Kurds have always played a critical role in the preservation of Iraq’s territorial integrity and said, “Iran’s relations with the Iraqi Kurds are deep-rooted.”

Describing Iran-Iraq ties as “strategic,” Valayati said the fates of Iran and Iraq are inseparable, adding Iran has always stood by the Iraqi government and nation during the war and reconstruction eras.

For his part, the Iraqi president said Iran-Iraq relations are not “tactical” but expressed hope that the relations would remain alive and forward-looking.

He also called on the Islamic Republic of Iran to play its constructive role in strengthening of national unity among Iraqi groups particularly between Baghdad and Erbil.

During the meeting, the two officials also discussed latest regional developments and exchanged views on ways for expanding bilateral relations between Iran and Iraq.