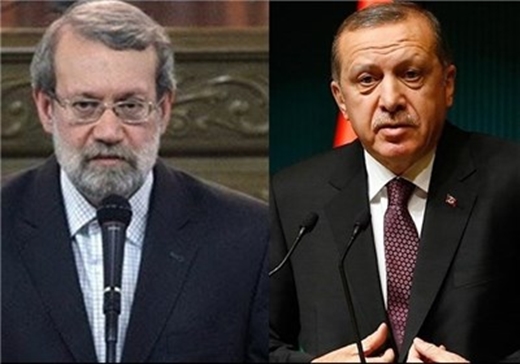 Iran's Ali Larijani and Turkey's Recep Tayyip Erdogan have stressed the need for tapping into their existing potential and forging stronger cooperation on energy, transportation, trade and industry.

The Iranian parliament speaker and Turkey’s president, in a meeting on Wednesday, underlined that raising the value of trade exchange between the two neighboring countries to $30 billion is within reach.

Ali Larijani, who is in Turkey to attend the 10th conference of the Parliamentary Union of the Organization of Islamic Cooperation (OIC) Member States (PUIC), held a meeting with Turkish President Recep Tayyip Erdogan on Wednesday.

The two officials stressed the need for stronger cooperation between Tehran and Ankara on energy, transportation, trade and industry, given their commonalities and capabilities.

They also discussed the developments in the Middle East region, and emphasized the necessity for joint efforts by Iran and Turkey for peaceful settlement of the regional conflicts and the establishment of peace and stability in the Muslim countries.

Iran and Turkey have plans to hike up the volume of their trade exchange to $30 billion by 2015.

Earlier this month, Iran’s minister of communications and Turkey’s minister of development explored avenues for strengthening economic relations between Tehran and Ankara.

They had also called for implementation of the deals signed in the first meeting of Strategic Cooperation Council in Turkey.