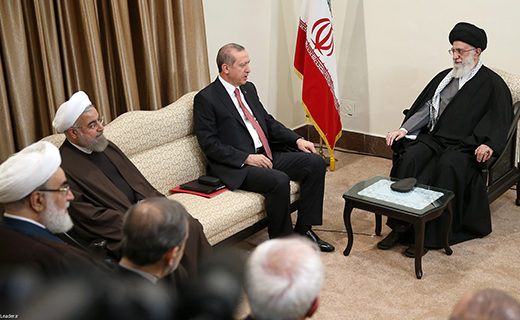 Ayatollah Khamenei said an end to attacks on Yemen and termination of foreign interference are key to settling the crisis of this country.

Ayatollah Khamenei further stated that efforts by Muslims nations to bolster each other and keep division at bay are central to Islamic Republic’s general policy, and that promotion of Iran-Turkey ties serves that purpose.

Recalling the barbaric acts of terrorist groups in Iraq and Syria, the Supreme Leader said those who fail to see the footprints of the enemies of Islam in the developments of these two countries are in fact fooling themselves.

Ayatollah Khamenei said we believe an end to attacks on Yemen and termination of foreign interference are key to settling the crisis of Yemen whose people should determine the future of their country.

At the meeting which was also attended by President Rouhani, the Turkish president said the region is facing many problems and that regional countries should cooperate with each other to settle these problems. “We should not wait for [the assistance of] the West.”

President Erdogan also said he personally does not view IS members as Muslim and has taken a stance against the grouping.