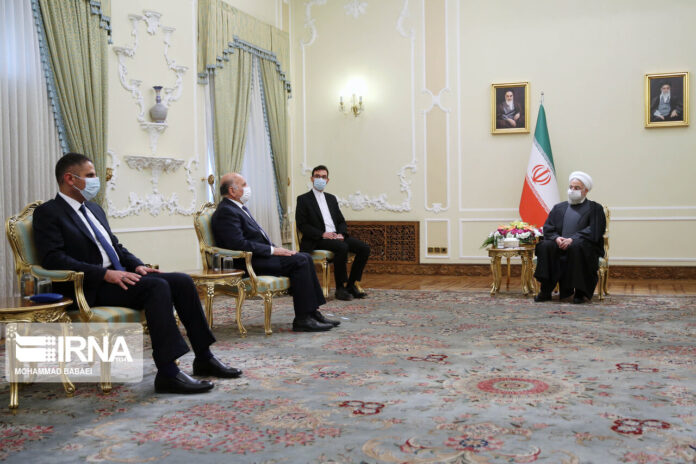 Iranian President Hassan Rouhani has expressed Tehran’s opposition to any foreign interference in the international affairs of Iraq, describing it as detrimental to the whole region.

“The Islamic Republic of Iran opposes any foreign interference in the internal affairs of Iraq and considers it to be to the detriment of the Iraqi people and the whole region,” President Rouhani said in a Wednesday meeting with Iraqi Foreign Minister Fuad Hussein in Tehran.

“The cowardly assassination of Martyr Qassem Soleimani and Abu Mahdi al-Muhandis was an example of the most shameful foreign intervention in Iraq’s internal affairs, which was carried out in the form of a state terrorist operation and targeted the heroes of the victory over ISIS,” he noted.

Rouhani welcomed the deepening of Tehran-Baghdad relations, and emphasised that the Islamic Republic of Iran and the Republic of Iraq have strong commonalities which connect the two countries to such an extent that the results and fruits of this brotherly and strategic bond have gone beyond the two countries and ensures the security and stability of the whole region.

The Iranian president said, “Regarding their economic potential, Iran and Iraq can complement each other as two economies, and the volume of trade should reach $20 billion a year.”

Referring to solving the problems of the Shalamcheh-Basra railway, Rouhani said, “We believe that this project is completely economic and commercial, and is diversifies the transportation routes between Iran and Iraq.”

The President also stressed that for Iran, supporting stability, security, independence, territorial integrity, as well as dignity and authority of Iraq, and promoting its regional and international status are of special priority.

“Cooperation of the two countries during the invasion of ISIS forces is a great example of strengthening bilateral relations to save the region from Takfiri terrorists.”

The President also stressed that Iran supports Iraq’s presence in regional interactions and believes that Iraq is an important party in the region’s political and security interactions.

Rouhani expressed hope that the new US administration would reach the conclusion that its presence in the region is detrimental to security and would reconsider this policy.

In turn, Iraqi Foreign Minister Fuad Hussein described the Iranian President’s visit to Iraq as historic and unforgettable, saying, “In addition to deepening bilateral relations, this visit creates more opportunities for cooperation and speeds up the implementation of agreements.”

The Iraqi Foreign Minister said, “According to various agreements reached by the officials of the two countries, interactions and relations in various economic and trade fields are being pursued, and Iraq seeks to expand and fully develop relations with Iran.”

The Iraqi Foreign Minister added, “The Iraqi people and government are always grateful for Iran’s support and cooperation in the fight against terrorism in Iraq, especially ISIS, and will never forget this.”

“Baghdad is persistently pursuing the withdrawal of foreign troops from Iraq and this is being done through negotiations and actions that have been taken,” he noted.