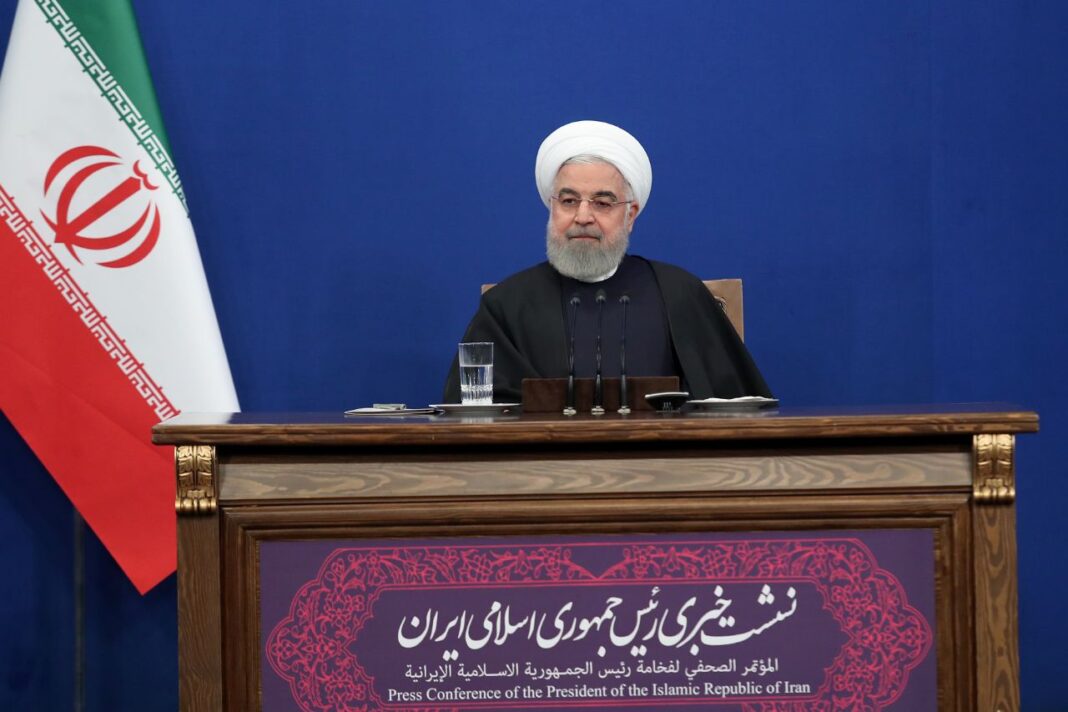 Iran’s President says the enemies think they can bring a weak Iran to the negotiating table with maximum pressure, but it is not possible.

“The ultimate goal of the United States is to put the government in a state of weakness, with the greatest pressure, while the people are despaired.

They want to take a weak government to the negotiating table, but it is impossible,” Rouhani noted Sunday.

“We have talked with authority and dignity to the world, but a weak Iran will never go to the table,” the president said.

Rouhani made the comments during his 14th press conference since 2013, attended by 200 journalists from 20 countries.

He went on to say that if different sectors of the country during the past six and a half years are compared with the years before his administration, one can see despite sanctions and pressures, we have experienced oil-free economy for the first time in the history of Iran during the past two years.

In response to a question regarding the high possibility of Donald Trump’s election in 2020, Iranian president said it doesn’t matter to us which party in America is ruling.

“What is important to us is that the US officials and the White House change their minds and choose what is in the interest of the American people and the nations of the region. No matter what person or party it is. I have no opinion about any particular party or person. What is important is that there should be someone in the White House that follows the right path,” underlined Rouhani.

Further, he mentioned that the United States must forget about unilateralism and stop introducing itself as the world leader. “If they respect other nations and the rule of law, we can overcome these problems,” he said.

Reiterating that it doesn’t matter to Iran what party in America is in power, he added “what matters to us is the national interests of our country.”

He pointed out that some in the US believed pressure could force Iran to do what they want, while others believed that Iran is very strong and they should reach a deal with the country.

“The previous US government believed in this policy and we reached an agreement. During the implementation of this agreement, the other group came to power and they believed that the solution is to impose their demands on Iran.”

Rouhani said their prediction was that Iran’s resistance would last no more than three or four months, and when Iran surrendered, it would accept their proposed package.

“Today, 20 months have passed since then, so the maximum pressure has failed; our situation in the region is better; we have good unity within the country.”

“They wanted the people to come to the conclusion that without agreement with the United States we cannot endure, but it became ineffective with the Iranian people’s resistance,” stated Rouhani.

He also noted that if the United States returns to the nuclear deal and stops its sanctions, it can enter negotiations in the form of P5+1 group of countries.

Rouhani’s presser came as Iran is gearing up for the 11th parliamentary elections slated for February 21.

The president finally urged Iranians to take part in the elections en masse to “disappoint the enemy.”