Iran Not after War but Prepared to Defend Itself: IRGC 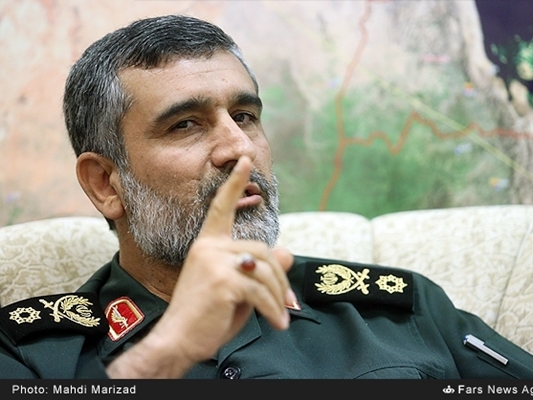 A senior IRGC commander says Iranian armed forces and nation never welcome any war but they are fully prepared to defend the country against any threat.

In an interview with IRNA, Commander of the Islamic Revolution Guards Corps (IRGC) Aerospace Force Brigadier General Amir-Ali Hajizadeh referred to the downing of an American spy drone in the Iranian waters and said the US move to dispatch its spy drone to Iranian airspace stand against all international law.

“Iran’s Armed Forces downed it based on their legal responsibility to protect the country’s territorial integrity,” he added.

“Maybe it was some American generals or operators who conducted the violation. We don’t know but we know that the move stands in stark violation of all international aviation law,” he noted, adding that the drone received Iran’s natural response.

According to the Iranian commander, Iran will repeat its response if the aggression keeps going on.

“Over the past forty years, the Islamic Republic has always been targeted by the enemies and the eight-year war on Iran imposed by Iraq under Saddam is a prime example of such oppression against our country,” he said.

The enemies have always been seeking to impose their domination on Iran. “That’s why we should always remain vigilant against their plots.”

He also noted that Iran has managed to gain self-sufficiency in defensive area because no country provided it with the necessary defensive equipment in the past.

“That’s why the US’ most sophisticated drone was downed by domestically made equipment,” he said.

He said Iran already has a collection of the US drones downed on various occasions.

Iran shot down a US surveillance drone on Thursday in its territorial waters in the Persian Gulf. This has created a dangerous new level of tension between the two countries in the region.