A look at Iranian newspaper front pages on Oct. 23

IFP has flipped through the front pages of the Iranian dailies on Thursday and picked headlines from 24 of them.

Instructions by the Supreme Leader that the country should stop relying on oil revenues dominated the front pages of the Iranian dailies on Thursday. Also appearing on the front pages were warnings by President Hassan Rouhani during a visit to Zanjan that promotion of virtue and prevention of vice should not become a source of insecurity in society. Comments by police officials about acid attacks in Isfahan last week drew a lot of front-page attention too.

Abrar: “Acid attacks carry the death penalty if they are designed to terrorize the public,” the chairman of parliament’s Judicial and Legal Committee said. 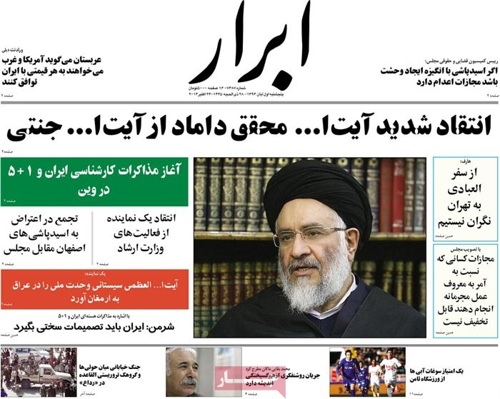 Abrar-e Eghtesadi: MPs have decided not to give the executive branch a freer hand in budgetary affairs.

Abrar Eghtesadi: Establishment of international banks in free trade zones has been placed on the agenda of the Money and Credit Council. 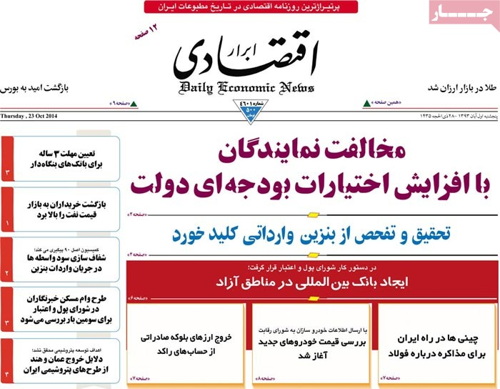 Afkar: “We are in the final stages of [nuclear] talks,” Foreign Ministry Spokeswoman Marziyeh Afkham said. 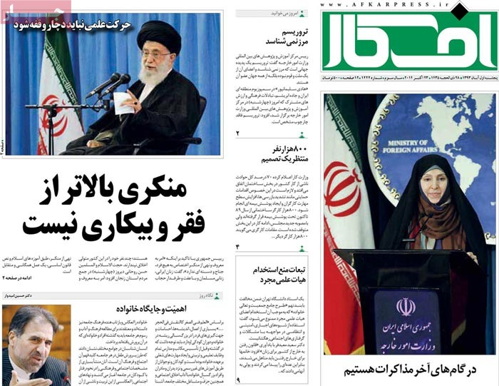 Aftab-e Yazd: There are rumors that General Motors may make a comeback to Iran. 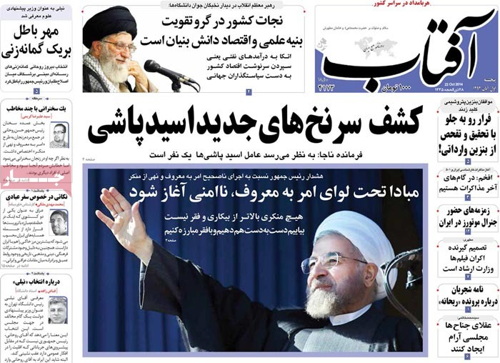 Arman-e Emrooz: “The sale of hunting rifles has stopped,” the defense minister has told a joint meeting of the Environment Protection Organization and the Defense Ministry. 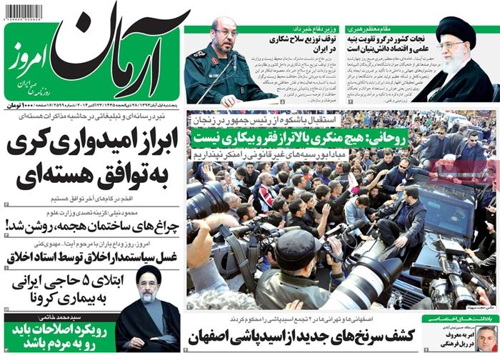 Asr-e Iranian: Iran has moved a notch up in the medals table of the 2014 Asian Para Games. 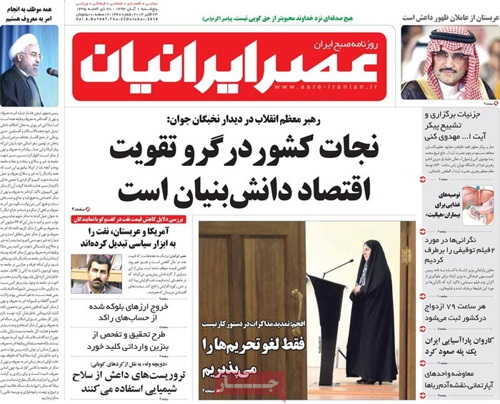 Asr-e Rasaneh: The oil ministers of Iran and Iraq have met to promote cross-border economic cooperation. 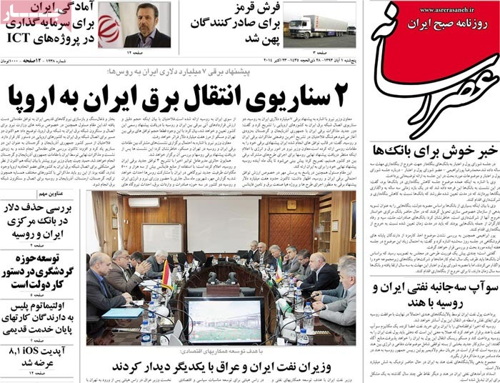 Asrar: “Promotion of virtue and prevention of vice should not be monopolized by one particular group,” the president said.

Asrar: Former President Mohammad Khatami has urged the “wise members” of both parties [reformists and principlists] to form a “calm and moderate” parliament. 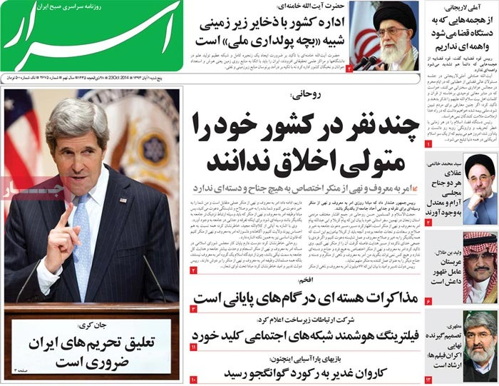 Ebtekar: President Rouhani has warned against politicization of efforts to promote virtue in society. 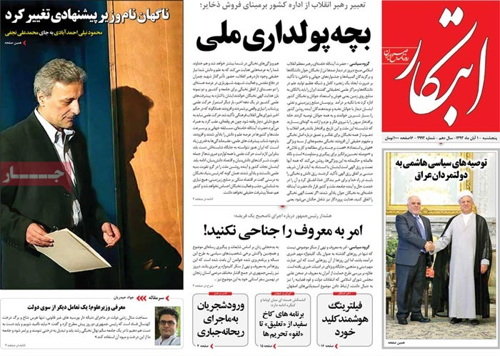 Eghtesad Pooya: “Recent flooding in Mazandaran has left some $25 million in damage,” the governor general of the Caspian province said. 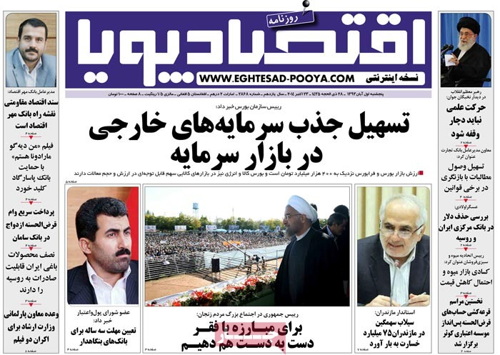 Esfahan Emrooz: “Police investigations into acid attacks are underway. The public should not pay attention to rumors about the case,” said the prosecutor of Isfahan [where a recent spate of acid attacks has put residents on edge]. 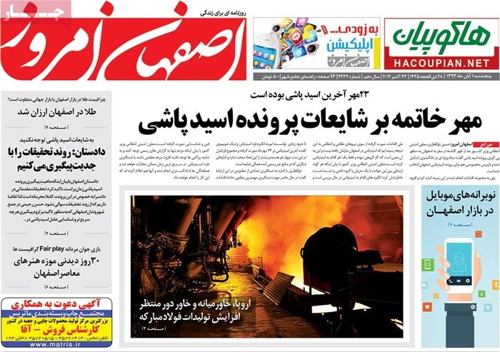 Etemad: The health minister [who is an ophthalmologist] has examined the eyes of a girl who has suffered serious injuries in a recent acid attack in Isfahan.

Etemad: “We are not denying our past mistakes. Reformists should help eliminate the possible skepticism of the establishment about the [reformist] movement,” former President Mohammad Khatami said.

Etemad: The smart filtering of social networking sites has got underway. 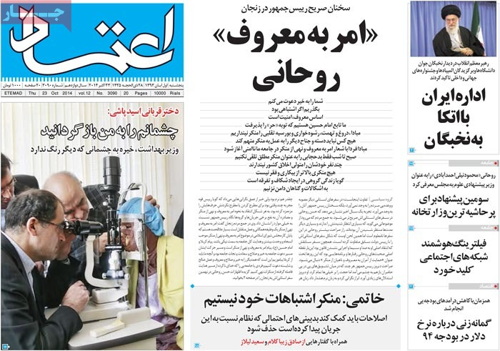 Ettela’at: In a surprising admission, a Saudi prince has blamed the support Saudi Arabia and a number of other countries have lent to the Syrian opposition for the emergence of ISIL.

Ettela’at: “Unemployment and hunger are the worst of social ills,” President Rouhani said during a visit to Zanjan province.

Ettela’at: “The president has tapped Dr. Mahmoud Nili Ahmadabadi, the current chancellor of Tehran University, for minister of science, research and technology.” It came against the backdrop of speculations that Mohammad Ali Najafi, the acting minister, will be named to seek parliamentary approval.

Ettela’at: “Reliance on oil is equal to giving world politicians a chance to determine the future of our country,” the Supreme Leader has told a host of especially-talented students. 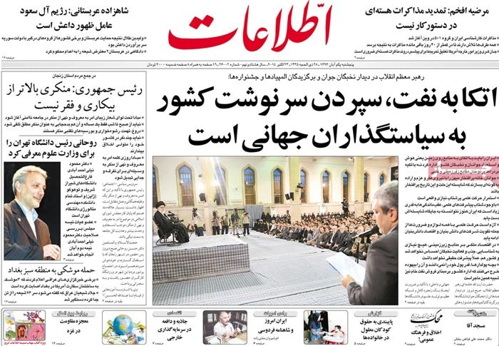 Farhikhtegan: The chairman of the Expediency Council has said that an increase in the number of graduate students is in the best interest of the country. 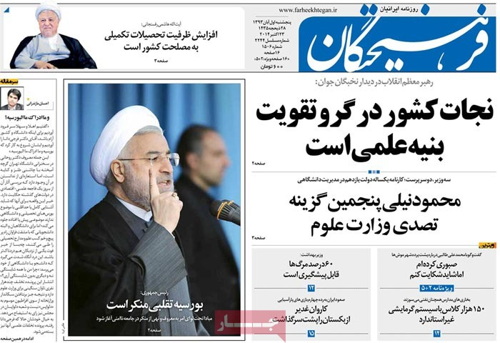 Haft-e Sobh: Sources say Islamic Republic of Iran Broadcasting will restart airing widely-watched Premier League soccer matches as of next week. A spat over broadcast fees between the national broadcaster and the Football Federation has stopped the former from airing the games live. 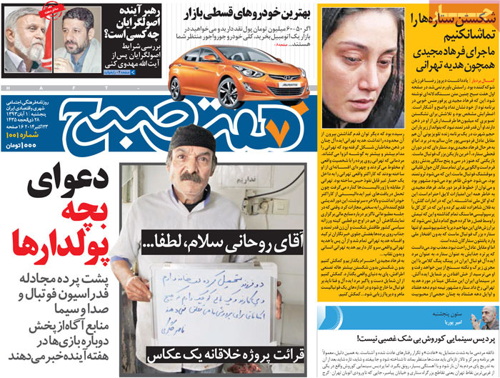 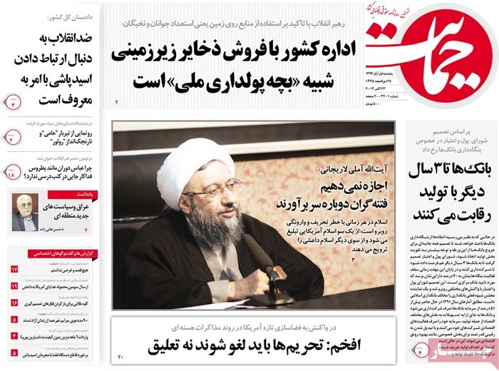 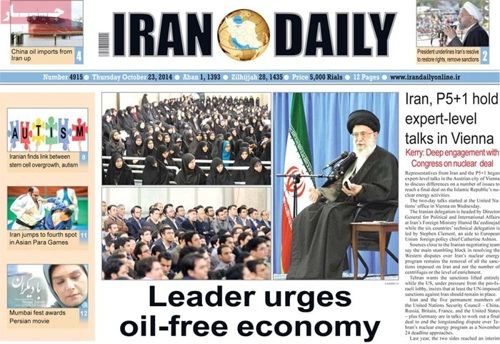 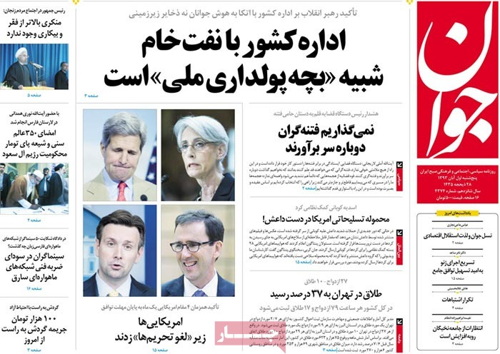 Jomhouri Islami: “The inflow of foreign investment into the capital market will be facilitated,” a spokesman of the Securities and Exchange Organization said.

Jomhouri Islami: “Iran is ready to cooperate with Iraq at any level Iraqi officials want,” the chairman of the Expediency Council has told the Iraqi premier. 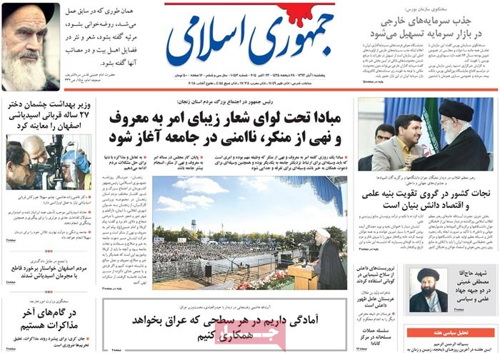 Kayhan: “The acid attacks in Isfahan are unrelated to morality laws,” the vice president for legal affairs said. 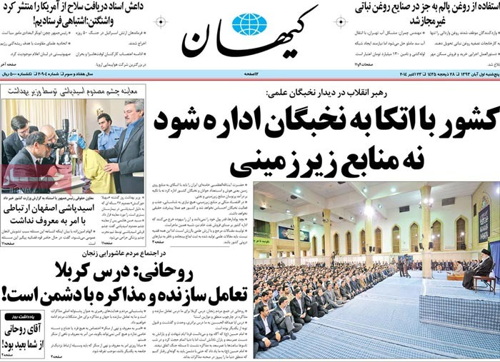 Mardomsalari: “Iran will continue its constructive interaction with the rest of the world,” the president said. 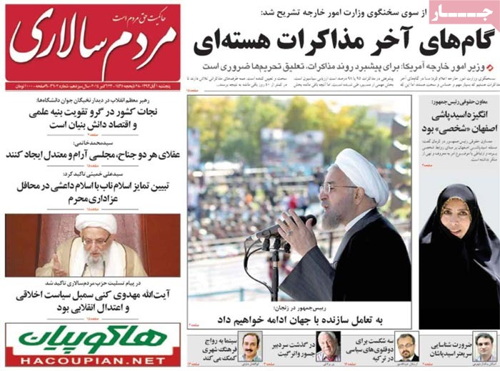 Qods: “Iran is to export electricity to Europe,” the deputy energy minister said. 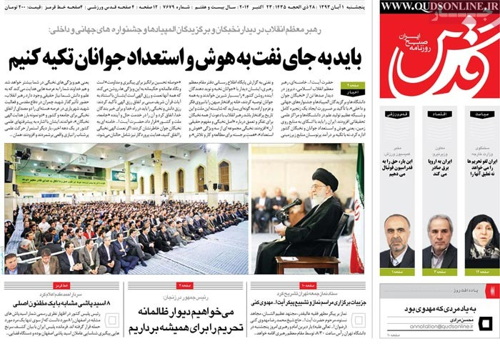 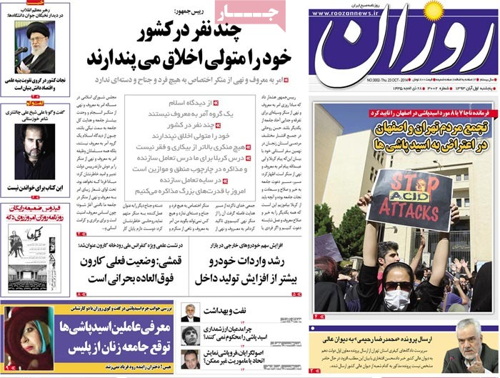 Shahrvand: “Five people who are infected with coronavirus have been identified across Iran,” the deputy health minister said. 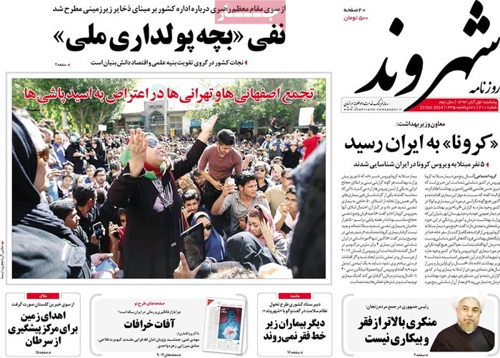