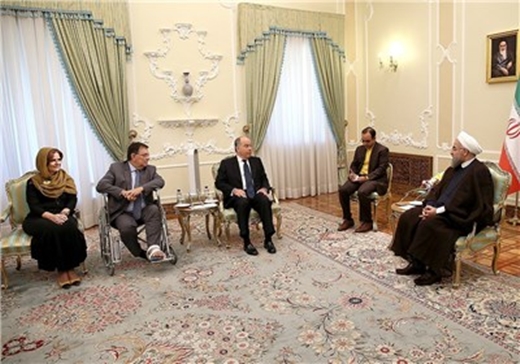 Brazilian investors can use the opportunity created by the nuclear deal between Iran and P5+1 to have a stronger presence in Iran, President Rouhani said.

Iran has always welcomed the development and deepening of its cooperation and good relations with Latin American countries, Rouhani said in a meeting with visiting Brazilian Foreign Minister Mauro Vieira in Tehran.

Iran attaches special significance to the promotion of its amicable ties with Brazil as an effective country in South America with a progressive economy, he said, highlighting the important role Brazil has in maintaining stability and security in Latin America.

The president referred to various advancements both countries have achieved in the fields of industry, technology, and science, calling for all potential for closer interaction between Tehran and Brasilia to be tapped.

Rouhani pointed to the new opportunities created in Iran after the conclusion of the nuclear deal, saying, “Brazilian investors can take advantage of this opportunity and have a stronger presence in Iran and participate in major projects.”

Vieira, for his part, said his country is determined to have closer and stronger relations with Iran in economic and political fields, adding that the two sides have the potential to play complementary roles for each other’s economy.

He hailed Iran’s effective role in creating balance and stability in the region, saying Brasilia has always supported and acknowledged Tehran’s positive and historical engagement in regional and international developments.

Vieira also delivered a letter of invitation by Brazil’s President Dilma Rousseff for President Rouhani to pay an official visit to the South American country.