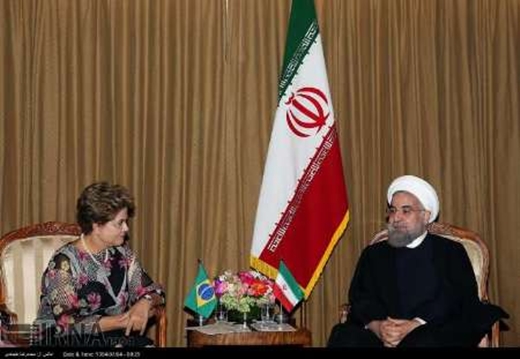 Terror groups should not get a chance to turn into terrorist states, President Rouhani said in a meeting with his Brazilian counterpart in New York.

Brazil regards Iran as an influential power in the region and supports joint investment between Tehran and Brasilia, said Brazilian President Dilma Rousseff in a meeting with President Rouhani in New York Friday.

President Rouhani welcomed a boost in bilateral relations with Brazil and said terrorist groups should not be allowed to turn to terrorist states.

He also supported the expansion of economic, trade, scientific and cultural ties in line with the capacities and commonalities between Iran and Brazil.

The president recalled Tehran-Brasilia friendly ties and said the Iran visit by the Brazilian foreign minister was a new step in expansion of bilateral ties which he hoped will be further developed in the future.

“The Islamic Republic of Iran has no limits in expansion of ties with Brazil,” he said, adding that both countries should try to implement the existing bilateral agreements.

As for the opportunities created in the aftermath of the nuclear deal between Iran and world powers, President Rouhani said that Brazilian firms can contribute to Iran’s construction projects and the capital market.

Rouhani said Iran and Brazil can promote their ties in the cultural and political fields and added, “Our countries can cooperate in regional issues, global security, anti-terrorism, the fight against drug smuggling, and South-South relations.”

He said that Iran is willing to expand ties with BRICS countries, particularly with Brazil, adding that Tehran welcomed interaction between the private sectors in both countries.

“Iran lies at the heart of a market with a population of 300 million in its neighborhood. Iran is a major energy hub and enjoys educated and capable young human resources,” he added.

Rouhani invited the Brazilian president to visit Iran and said Tehran and Brasilia can serve as a bridge between the Middle East and Latin America.

On the Syrian crisis, he said that the Syrian nation is entangled in the fight against terrorism and undermining the central government in Damascus has helped terror groups go about massacring civilians.

“Terror groups should not be allowed to become terror states. If the fight against terrorism in Syria becomes a priority of all countries, it will be an appropriate course for the settlement of problems and political reform in Syria,” he said.

She supported expansion of trade, economic and cultural ties between Iran and Brazil and said Brasilia welcomes the swift removal of sanctions against Iran.

“Brazil regards Iran as a regional power and is interested in expansion of bilateral trade and economic ties. We invite Iranian firms for investment in Brazil,” she added.

President Rousseff said Iran has an outstanding role in the establishment of stability in the region, adding, “We think weakening the Syrian government will give rise to strengthening terrorism. World has understood that repercussions of the continued war in Syria means reinforcing of     IS.”

She further said that there is no doubt over the necessity of political reforms in Syria, but the priority has to be given to saving its people and stop the flood of refugees.

President Rouhani is in New York to take part in the United Nations General Assembly and the UN Sustained Development Summit.