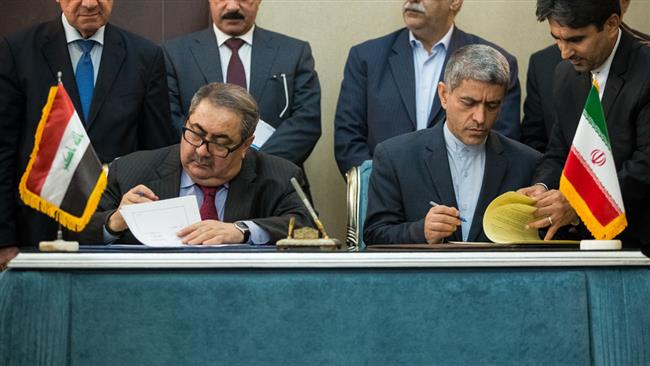 Iran and Iraq will expand customs cooperation while taking steps to do away with double taxation and encourage mutual investment in the two countries, said Tayyebnia.

Iran and Iraq have signed three agreements for expansion of cooperation in various economic fields between the two neighboring countries.

The agreements were signed in the presence of Iran’s Minister of Economic Affairs and Finance Ali Tayyebnia and his Iraqi counterpart, Hoshyar Zebari, in Tehran on Sunday.

The agreements aim to boost cooperation between Iran and its western neighbor in such areas as customs, taxation and mutual investment.

Speaking to reporters on the sidelines of the signing ceremony, Iran’s minister of economic affairs and finance said according to the agreements, Iran and Iraq will expand customs cooperation while taking steps to do away with double taxation and encourage mutual investment in the two countries.

Tayyebnia further said that the volume of bilateral trade between Iran and Iraq currently stands at $12 billion a year, expressing hope that the new agreements will increase the figure to over $20 billion.

Zebari, for his part, congratulated the Iranian nation and government on the conclusion of the nuclear talks between the Islamic Republic and P5+1, which led to an agreement between the two sides, known as the Joint Comprehensive Plan of Action (JCPOA).

Zebari described the nuclear agreement between Iran and the sextet as rational, helpful and beneficial to both Iran and the entire region.

The Iraqi minister also said that the relations between the two countries are progressive, expressing hope that Iran-Iraq ties will further expand in the future.

Zebari arrived in Tehran Saturday at the head of an economic delegation.

He met with Foreign Minister Mohammad Javad Zarif Sunday, during which the two sides explored various aspects of bilateral relations.