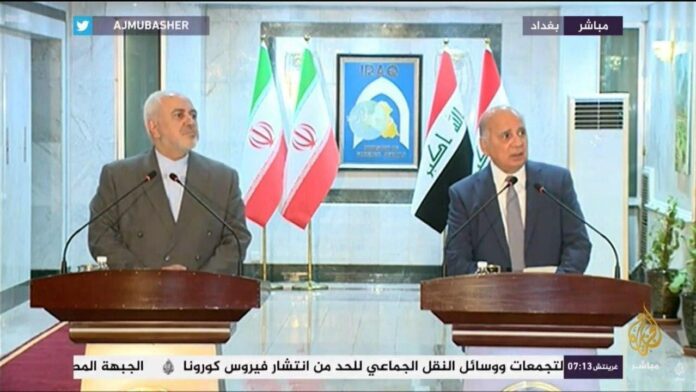 The foreign ministers of Iran and Iraq have expressed the two countries’ determination to broaden the bilateral economic and trade ties.

Iranian Foreign Minister Mohammad Javad Zarif, who is in Baghdad on a one-day visit, held a joint press conference with his Iraqi counterpart Fuad Hussein on Sunday after two rounds of talks.

In the presser, the top Iraqi diplomat said he and Foreign Minister Zarif have discussed the economic interaction between the two neighbours and the impacts of the outbreak of coronavirus on the economic ties in their bilateral talks.

“We share the view that it is necessary to support Iraq’s sovereignty,” Hussein noted, adding that Zarif has emphasized that a strong Iraq would contribute to a strong region.

“We must keep the region and Iraq away from the international tensions and support Iraq’s sovereignty,” he stressed, noting that Baghdad seeks “balanced ties” with the neighbouring states.

For his part, the visiting Iranian minister said Tehran is delighted to have supported Baghdad in the fight against terrorism, which is the common enemy of humanity.

It is necessary to hold talks about the regional and international issues, since the region requires calm, Zarif added.

He further said the US assassination of top Iranian commander Lt. General Qassem Soleimani and Iraqi commander Abu Mahdi al-Muhandis was a great loss to the war on terrorism.

It is highly significant for Iran that Iraq’s sovereignty is not violated, Foreign Minister Zarif underlined, calling for vigilance to combat the constant threat posed by the ISIS terrorist group.

He finally called for the enhancement of economic ties between Tehran and Baghdad, saying the two neighbours will work on various joint plans such as shipping industry, maritime border, and connection of the railroad networks.