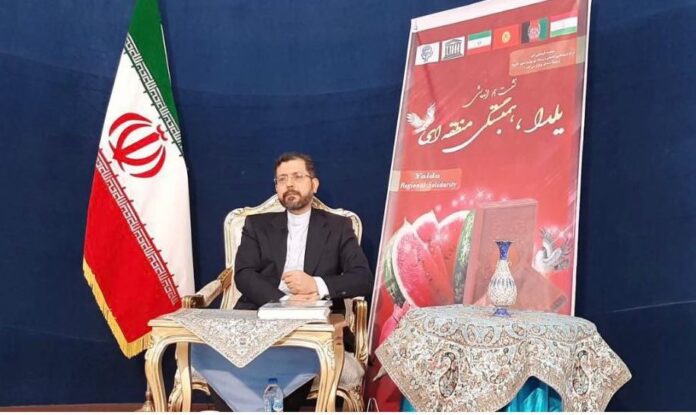 A webinar entitled “Yalda, Regional Solidarity” was held under the auspices of the Iranian Foreign Ministry and a number of other organizations to commemorate the ancient festival of Yalda Night and its role in unity among the regional nations.

The webinar called “Yalda, Regional Solidarity” was held on Saturday evening under the aegis of the Iranian Ministry of Foreign Affairs’ Centre for Public and Media Diplomacy, the ECO Cultural Institute, Saadi Foundation, and Allameh Tabataba’i University, in order to commemorate the old festival of Yalda and highlight its role in solidarity among the regional people.

In his address to the webinar, Foreign Ministry Spokesperson Saeed Khatibzadeh highlighted the history of the ancient event and its role in convergence and peace among people of the region.

“The Yalda Night, aka Chelleh Night, has been regarded by Iranians as the night of light’s victory over darkness and a symbol of equality since ancient times,” he added.

The Iranian spokesperson also underlined that the cultural approach to the civilizational sphere of the regional countries has become growingly stronger, as these cultural elements are known as factors unifying the regional people.

The spokesperson of the Iranian Ministry of Foreign Affairs and head of Centre for Public and Media Diplomacy finally noted that the Yalda Night will be inscribed as a regional intangible cultural heritage on the UNESCO’s list next year.