Iran Has No Special Plan to Control Ronaldo, Iniesta: Queiroz 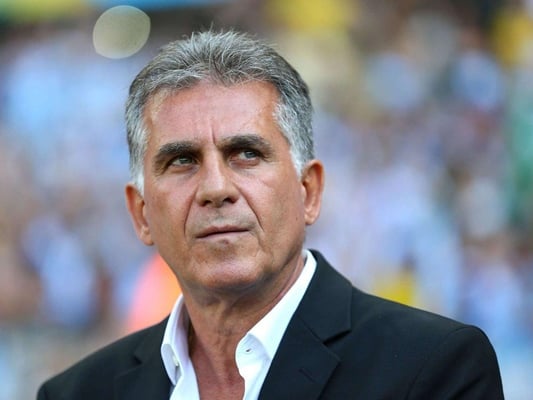 Team Melli is to face Spain in Kazan on 20 June before meeting Portugal in Saransk five days later. Queiroz has been in charge of Team Melli since April 2011. He led the team in World Cup 2014, during which Team Melli showed a brilliant performance in the match against Argentina.

In an interview with the Spanish-language daily Marca, former coach of Read Madrid has elaborated on his views about the upcoming World Cup. Here is what he told the daily, according to a report by Tasnim News.

What do you remember of the elimination of Portugal during World Cup 2010?

It was a highly difficult game for us during which the best team finally won. But if there was a more attentive referee or if there was a Video Assistant Referee (VAR), the story could have been changed. That is the past.

You are usually not lucky when it comes to referees; for example, the penalty against Argentina in the World Cup 2014.

The referee’s decision inflicted a heavy blow on us. We played very well against Argentina, but Messi came up with a magical pass. Two people turned the table on us during the game: Messi, with his fantastic pass, and the referee who didn’t see a penalty for Ashkan Dejagah. If we were awarded the penalty kick, that could have been 1-0 for us. Meanwhile, Zabaleta should have received a red card. But we always have to move on.

You have said once in an interview with the FIFA website that Messi should be banned.

(Laughing) He should have been banned from playing in the World Cup 2014. He does things that shouldn’t be allowed in football. To me, Ronaldo is the best player in the world, but Messi does things that are far beyond human capabilities.

What do you think about your draw, which grouped you with Spain, Portugal and Morocco?

It’s a very difficult and the most complicated group. But we have a clear mission: facing things, moving forward and seeking to advance. This is our goal. Our unity was very good, with a consistent sense of belonging. But we aren’t as unified as in the past. Our goal is to appear in the World Cup with a better and more competitive spirit to honour the national team’s jersey.

Your first match in the World Cup is against Morocco. How do you see it?

Iran and Morocco are two teams which seek to advance the stage group. This is better for everyone. It goes without saying that Spain and Portugal don’t play just to pass this stage. They have come to become world’s champion. But Morocco and Iran seek to be in the last 16.

How do you see today’s Spain?

Firstly, Spain has returned to its glorious days. They play beautifully, controlling the space and the ball.  They are in full control of the game. Under Lopetegui, they have made progress. They have the same creativity as they had under Vicente Del Bosque. But today they have progressed and are creative in every 10 minute. This makes them a fierce rival. They not only control space and rhythm of the game but also play with high intensity.

What are the weak points of Spain in your view?

I don’t see any weak point. During the World Cup, we are going to face Spain’s football rather that its basketball. We are not going to play against an NBA team. Football is a matter of moments, decisions and inspirations. It is a game during which everything seems possible. It is a unique sport making it the most attractive one in the world. There is no winner beforehand in football. Iran will play every game, every minute and has plan for every ball. So, let’s allow the football god do its justice and make the best team win.

Do you have special plans against Ronaldo or Iniesta?

No, not at all. We are seeking to be a competitive team trying just to have a plan for 90 minutes. We know that there should be a big change before Spain. During our qualifying matches, we controlled the ball for 60 or 70% of the time but we have to push the team toward this sense that this is going to be the other way around during World Cup. We need to change our mindset. Inspiration is our greatest rival. We don’t need to make a special plan against Iniesta because Spain’s head coach may decide to put Silva, Isco, Asensio or Pique in his list for the game. We should not think of individuals. We need to be well prepared and then work on each game. We should find the origin of the possible problems.

You are going to face Ronaldo again.

It is a special occasion for me because we lived with each other for a long time. He is the best player in the world, but when there is a match, your team matters more than anything else.

How do you see Iranian football players?

They are strong and determined. We have team with a high personality and high sense of belonging. The top players of Iran are included in the national team. We don’t have stars in prestigious teams like Real Madrid, Manchester United or Inter Milan. Our star is our team. We always work together with the same mentality. We try to perform well and achieve victory through unity. The players have adapted themselves to the principles set for them. Each player knows well what expectations the team has of him.

Is it easy to work with Iranian players playing in Portugal and Belgium leagues?

It is not easy at all. We have players playing outside Iran who have international experiences. On the other hand, we have players who are playing in Iran’s league. That’s why we have sought to hold some training courses to raise their capabilities for the World Cup 2018.

And finally, this World Cup will be Iniesta’s final World Cup.

It is bad for football world that such a great player like Iniesta is going to leave Barcelona. He was part of voting that never did him justice. The world of football owes a lot to him. It is hard to believe that he has never been chosen as the best player in the world. Such things happen in football sometimes.