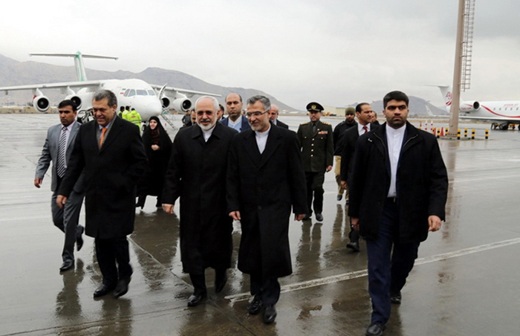 President Ashraf Ghani has told Mohammad Javad Zarif that Afghanistan and Iran, which share common interests, should cooperate to fully tap into their potential.

President Ghani hoped the visit will take place soon, saying that consolidation of ties with Iran is of prime importance to Kabul as Tehran is Afghanistan’s long-standing ally.

He said that Afghanistan and Iran, which share common interests, should cooperate to fully tap into their capacities.

The Afghan president further said that the present peace and stability in Afghanistan will help promote security in the region, adding his government is investing in cooperation with neighboring countries as well as Islamic nations.

For his part, Zarif welcomed formation of the national unity government in Afghanistan which promotes participation of all people in the country’s affairs and said a new chapter has opened in the life of the nation.

As always, Iran will stand by Afghanistan in all areas, he said.

The Iranian foreign minister also said that Iran is planning to run long-term programs based on mutual interest.

In a separate meeting with Afghanistan’s National Security Adviser Mohammad Hanif Atmar, Zarif said that Iran welcomes solid relations with Afghanistan, adding that both countries need to help the development process in the region.

The Afghan official hoped a future visit by President Ghani to Iran will result in working out cooperation agreements between the two countries in various fields.

Also in another meeting with former Afghan President Hamid Karzai, the Iranian foreign minister hailed the role of former president in consolidating good and long-term relations [with Iran], saying it could help boost stability, security, progress and prosperity in the region.

Karzai appreciated Iran’s support for Afghanistan over years and said that Tehran has always played a positive role in boosting security and political development in Afghanistan.

The Iranian top diplomat then met with Afghan permanent representative to the UN, Zahir Tanin, at Iran’s Embassy in Kabul.