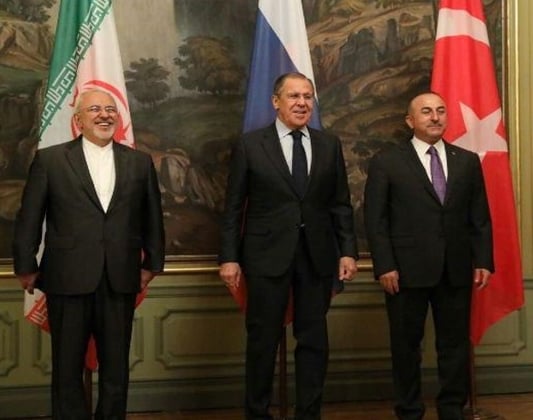 The meetings were held prior to a trilateral meeting among the three foreign ministers aimed at discussing the latest developments in Syria.

Zarif and Lavrov discussed various dimensions of bilateral relations and followed up on agreements made in a meeting of Iranian President Hassan Rouhani and Russian President Vladimir Putin in Turkish capital of Ankara early April.

According to a statement by the Iranian Foreign Ministry, the Iranian and Russian officials also talked about cooperation in the energy sector, the anti-terror fight against terrorism in the region, the legal regime of the Caspian Sea, the fate of the Iran nuclear deal, latest developments in Yemen and Syria, and progress of the Astana process.

Zarif and Cavusoglu also conferred on bilateral banking cooperation and international and regional issues, including the situation in Syria and the Astana process.

Later in the day, the three foreign ministers held a trilateral summit to discuss ways to end the Syria crisis. Zarif, Lavrov, and Cavusoglu issued a joint statement saying that they have agreed to increase joint efforts to help achieve “a lasting political settlement in Syria”.

The three states “agreed to increase joint efforts aimed at facilitating the achievement of a lasting political settlement in Syria envisaged by the UN Security Council resolution 2254 and through full use of multi-level mechanisms of the Astana format,” the top diplomats said in the joint statement.

The Astana process refers to crisis resolution talks, which have been underway in the Kazakh capital of Astana since late 2016, when the trio (Tehran, Moscow, Ankara) started working together to end the crisis in Syria.

Russia has been lending air support to Syria’s ground operations, while Iran offers military advisory assistance to the Syrian army. But Turkey supports militants fighting to bring down the government.

Moscow’s tripartite meeting comes as the Syrian government forces have made major gains against foreign-backed terrorists, pushing them out of their stronghold in the eastern Ghouta region near the capital Damascus.