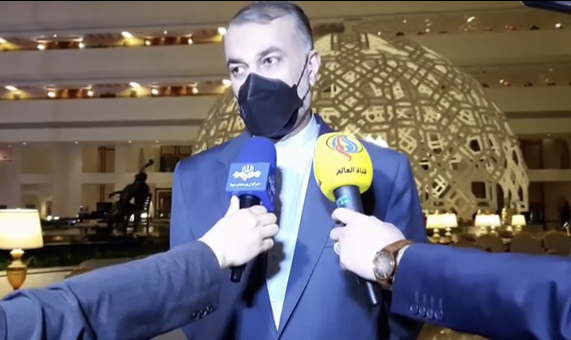 Iranian Foreign Minister Hossein Amir Abdollahian has arrived in the Qatari capital Doha on the second leg of a regional tour that earlier took him to Oman.

The foreign minister told reporters upon his arrival that he will hold talks with his Qatari counterpart as well as the Qatari Emir on bilateral and international topics during his visit.

“Good opportunities exist in Qatar. In the past, there have been talks on FIFA World Cup games and we will be discussing the capabilities of the Islamic Republic of Iran, especially in the technical and engineering fields, which are available to Qatar,” he said.

“During this visit, we will also discuss expansion of bilateral cooperation, especially in the field of trade.”

“In the economic domain, we raised the issue of resuming operation of launches between the two countries, seeing that the coronavirus outbreak is curbed, and the Omani side promised to follow up on this matter, so that we would witness the resumption of the operation of launches for exchange of goods between the two countries,” the foreign minister said.

Amir Abdollahian noted that he discussed joint investments with Oman, including in the Iranian port city of Chabahar, as well as resumption of flights between the two countries to ease problems nationals of both countries are facing, especially in the area of trade.

The foreign minister also touched the negotiations between Iran and the P4+1 countries for the removal of sanctions, which are underway in Vienna.

“In the past, Omanis played a role in helping these negotiations bear fruit within the framework of the nuclear deal … in connection with some western sides. Omanis … continue their diplomatic efforts to help the involved parties reach a good agreement,” he said.