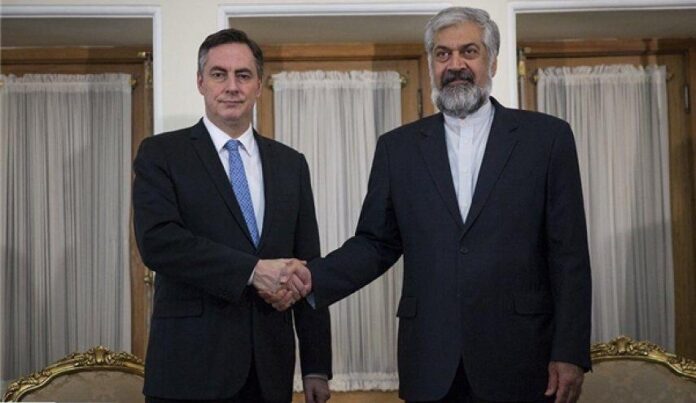 Iranian Deputy Foreign Minister Morteza Sarmadi has held talks with David McAllister, the Chair of the Foreign Affairs Committee of the European Parliament, in Tehran.

During the Wednesday talks, McAllister once again underlined the EU’s support for the Iran nuclear deal.

Sarmadi, for his part, appreciated the stances held by the EU in support of the JCPOA, and said the European Union should back the nuclear deal in a more practical and tangible way in defiance of the parties who try to bring an end to the accord.

He said the Islamic Republic of Iran’s policy in the region is based on fight against terrorism and establishment of stability and security.

Sarmadi referred to the developments in Yemen, and highlighted the need for the EU’s serious support for the innocent people of Yemen against the massive airstrikes of aggressors on this country

Also at the meeting, the two sides conferred on various aspects of relations between Iran and the European Union, and welcomed the expansion of reciprocal parliamentary ties.

During the meeting, the European lawmaker conveyed both the EP and the EU’s all-out support for the implementation of the nuclear agreement, known officially as the Joint Comprehensive Plan of Action (JCPOA).

Europe, he said, considers the JCPOA to be a useful document which promotes international peace and stability, and supports its full implementation by all signatories.

While trying to enhance common understanding, he said, the MEPs have traveled to Tehran for consultations with Iranian officials about issues of common interest as well as regional and international challenges, he said.