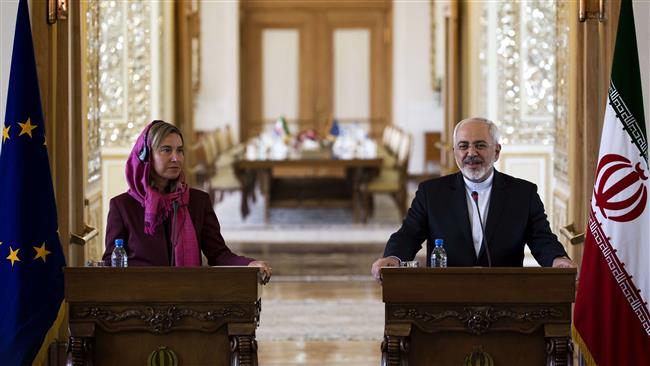 Speaking at a press conference with visiting EU foreign policy chief Federica Mogherini on Tuesday, Zarif said Iran-EU “high-level” talks are to resume in the “near future.”

“Today we decided to start a new round of talks between Iran and the European Union…which we call it high-level negotiations,” he said.

Zarif said the talks will begin soon at the “level of deputies” and “will gradually” move to the ministerial level, adding that the talks will cover such issues as “energy, transportation, trade, environment, human rights and the scourge of narcotics.”

He said ongoing crises in the Middle East are posing “a serious threat to the entire world and particularly members of the European Union.”

Mogherini, for her part, said the nuclear agreement between Iran and P5+1 was a sign that diplomacy can succeed.

She said the nuclear breakthrough also has an “added value” in that it can serve as an example for addressing other issues around the world.

“The deal is not the end of a process, it is the beginning,” she added.

Mogherini said she has assured Saudi leaders that Iran’s nuclear agreement is a “good” accord which would benefit the “security” of the entire Middle East.

She noted that “full implementation” of the agreement would help Iran-EU relations, adding, “Europe and Iran are close.”

The EU foreign policy chief arrived in Tehran for talks on implementing a recent nuclear agreement reached between Iran and six world powers.

Mogherini, who is accompanied by EU political director Helga Schmid, arrived in Tehran on Tuesday, from Saudi Arabia.

Mogherini was a lead negotiator for the P5+1 group of countries in the long-running talks over Tehran’s nuclear program that culminated in the July 14 agreement.

According to Mogherini’s office, her visit “will provide an opportunity for exchanges on the implementation of the agreement.”

On July 14, Iran and the six world powers – the United States, France, Britain, Russia, China and Germany — finalized the text of JCPOA in the Austrian capital of Vienna.

Under the JCPOA, limits are put on Iran’s nuclear activities in exchange for a set of commitments by the P5+1, including the removal of all economic and financial bans against the Islamic Republic.

In a statement released on Friday, over 70 European political, diplomatic and military figures said the July 14 agreement provides a framework for an end to the Western dispute with Iran over the Islamic Republic’s nuclear program.

The EU statement urged all parties to implement the agreement and called on the international community to throw its weight behind it.