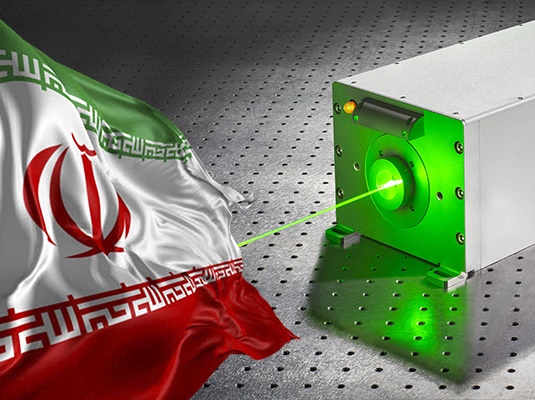 Iran has showcased its achievements in the field of laser technology at the Munich exhibition.

With nearly five decades of activity in the field of photonics and laser technology, Iran is now among the countries which have a say in that area. An exhibition hosted by the German city of Munich in June each year is perhaps the biggest and most important gathering of experts and authorities in the field of laser technology. This year, Iran is presenting its companies and products at the event for the first time. As Iran marks its first presence in the exhibition, we have conducted an interview with Dr Nabavi, the director of Iran’s Laser Science and Technology Centre. The following are highlights of the interview:

What’s Iran’s standing in the field of laser technology given the country’s background in this area? How does the world see Iran’s capability in this field?

Iranians and Iran each have a say in the field of laser technology. The most renowned Iranian in this field is professor Javan, who invented gas lasers in the world in 1960 and is a source of honour for all Iranians. As for Iran’s standing in the domain of laser technology, the country has been active in this field for nearly 50 years now. Iran began its work by building the necessary infrastructure both in terms of human resources and equipment. The centre was established with the aim of boosting the country’s capabilities in the field of laser in industry and medicine.

The first phase pertains to solid lasers, i.e. fibres, discs and semi-conductors, all of which have medical applications.

When it comes to self-sufficiency in laser products, are there any items that we can produce ourselves and we are not dependent on other countries for them, items that we would have to import before?

We have also reached self-sufficiency in some laser products. I’ll give examples in the fields of industry, medicine and higher educations. In industry, all countries, including Iran, tend to use turning and welding devices which use the laser technology in order to cut costs and improve quality. That is why those working in the industry in our country tend to use the laser technology in their workshops. The centre has also been working to design special industrial lasers, which has created jobs as well. One of the problems of Iran’s industry sector is that it does not readily trust domestic products. But now our industries are using numerous domestically-made products and we hope more and more locally-developed products will be used by local industries.

In the field of medicine, we made a device used for kidney, urinary tract and prostate surgeries. Other countries wouldn’t give Iran laser-operated equipment for prostate treatment as it is among dual-use devices. Under no circumstances will they sell Iran the equipment. So, the centre developed the equipment in just a few months and now our hospitals are using it.

In the laboratory domain, which pertains to universities, the laser technology is regarded as an interdisciplinary science and almost all university majors contribute to its development. For instance, those studying and working in the fields of mechanical engineering, materials engineering, chemistry, physics, electronics, et cetera can help both develop the laser technology and diversify its applications. So, we drew up a plan in 2014 to build equipment needed by universities which would be so expensive if it were to be imported. Now, we have produced almost 30 types of laser which could be used in any discipline. Universities can buy these devices at a lower price, with a higher quality and with better after-sales services. The Technology Department of the Presidential Office also pays 50% of the costs if our products are bought by science-based companies.

How do you see Iran’s participation, for the first time, in the Munich exhibition?

I personally asked the Technology Department of the Presidential Office to make the arrangements for us to have a pavilion at the Munich exhibition and present Iran’s accomplishments in the field. I said this time, which is our first, we can introduce our achievements and brief visitors on what areas Iran’s laser accomplishments are used in.

Laser needs to go through several stages to be created and applied. In the first phase, we should teach courses on the laser technology. This has been on the agenda since the very beginning and has been done actually. In the second phase, we should use the expertise of graduates and design laser parts based on the knowledge that we have acquired. Before that, simulation work must be done as well.

We have anything that is required for designing and simulation as well as doing calculations and theoretical work for any kind of laser in Iran. We have good scientific capability as well and are capable enough in designing. This means there has been consensus and agreement among different disciplines to create products. After that, we need to have parts required to produce laser equipment. These parts include optical parts, precise mechanical parts, an active environment and pumping systems. We are now capable of producing all parts required for laser devices in the fields of research, industry and medicine, and we don’t need to buy any of these from other countries.

Fortunately, by trusting science-based companies and supporting them and stopping buying required parts from abroad, the centre is now able to produce electrical pumping equipment. We have no problems in the control and electronics areas and we can take any orders. And the same goes for mechanics as well as optical pumping. This infrastructure is very important.

We can produce different types of electrical pumping devices with different wavelengths. Any country which wants to make progress in the field of laser should make progress in developing laser diodes. Fortunately, we have good infrastructure at the centre for this and we are completing it.

How do you see the prospects of laser technology in Iran?

Economy is very important when it comes to prospects for anything. In the laser domain, we have drawn on the science and technology available in the country to produce wealth and create jobs, especially through the support of the Technology Department of the Presidential Office and the backing given to science-based companies as well as the establishment of numerous companies.

The first customer of these companies is us ourselves. We are moving toward self-sufficiency in line with having a resilient economy and efforts to empower the whole society in different domains such as medicine, industry and higher education.

At the centre, we have drawn up an outlook plan under which we are going to develop gas lasers after solid lasers. We are going to invite different institutions and even the private sector to invest in establishing a large centre to render services, meet local needs and export our products. We hope these investments coupled with the support that we receive to empower the country will help result in more successes day by day.