Iran’s Foreign Ministry spokesman has condemned a suicide attack on a military centre west of the Afghan capital, Kabul, which left tens of people dead.

Bahram Qassemi offered condolences to the Afghan government and people as well as the families of victims of this heinous crime.

The spokesman slammed any use of violence and killing, and stressed the need for dialogue as well as national understanding in Afghanistan in order to achieve peace, stability and tranquility in the country.

The Taliban militant group launched an attack on a military training centre in Afghanistan’s central province of Maidan Wardak on Tuesday.

Some say over one-hundred members of the Afghan security forces were killed. Local officials say at least 65 killed in this attack. The raid started with a car bomb explosion inside the military training centre. Afghan forces gunned down the militants after five hours of fighting. 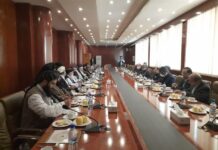