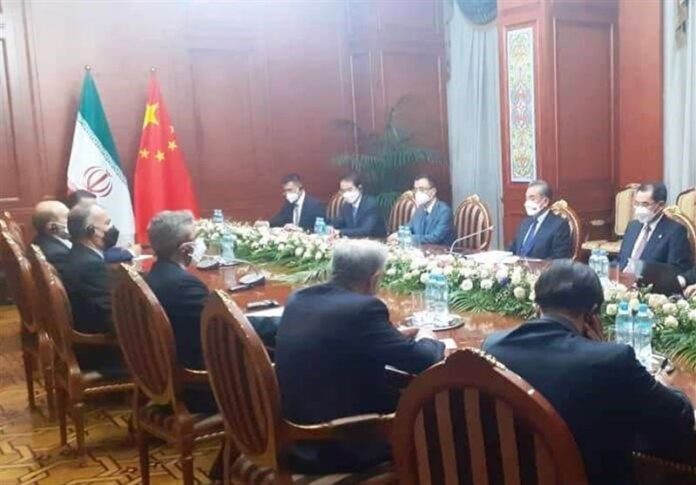 Iranian Foreign Minister Hossein Amir Abdollahian has sat down with his Chinese counterpart Wang Yi just ahead of a summit of the Shanghai Cooperation Organization (SCO) in Tajikistan.

In the meeting held on Thursday, the top Iranian diplomat emphasized that the foreign policy of the 13th Iranian administration is oriented toward Asia.

He said Iran is determined to further expand its relations with China based on a 25-year cooperation agreement which serves as a road map for both sides.

Amir Abdollahian touched upon the areas of Sino-Iranian cooperation, and expressed his gratitude to Beijing for backing Tehran’s stances.

He further blamed the United States as the main culprit undermining the 2015 Iran nuclear deal known as the Joint Comprehensive Plan of Action (JCPOA) and Tehran’s nuclear cooperation.

The Iranian foreign minister referred to Washington’s unconstructive position on Tehran’s nuclear issue, saying the White House should learn not to use a threatening tone when talking to the Iranian nation.

He said the United States’ ignominious pullout from Afghanistan following its years-long occupation of the country was yet another example of Washington’s unconstructive unilateralism whose adverse consequences are bearing down on Afghanistan’s neighbours.

The head of Iran’s diplomacy apparatus said the only acceptable political future for Afghanistan would be to form a broad-based government that brings together all groups.

He then highlighted invaluable cooperation between Iran and China in fighting COVID-19, and appreciated the Chinese government’s broad cooperation with Tehran in sending coronavirus vaccine consignments following talks between the presidents of both countries.

The Chinese foreign minister, in turn, underscored the need to forge closer cooperation between the two countries on international issues and reiterated Beijing’s support for Iran’s permanent membership in the SCO.

He also called for closer consultations between Iran and China on the political future of Afghanistan.