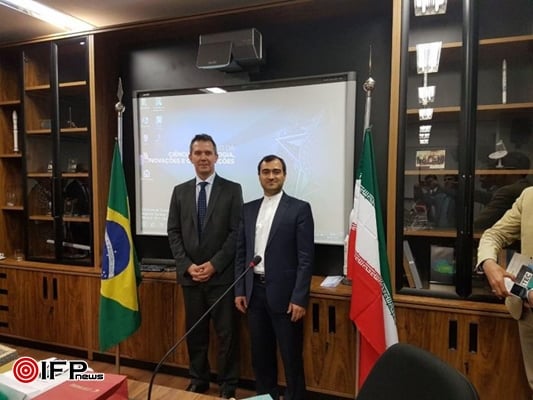 In the meeting, the two sides stressed the importance of working together closely in the domains of science, technology and innovation.

During the 4-hour program, opportunities for mutual cooperation on science, technology and innovation in various areas, particularly nanotechnology, were discussed under an action plan.

In the domain of university affairs, B2B programs were envisaged for sci-tech parks. Plans to give fresh impetus to research at universities were also introduced.

The Iranian delegation at the meeting was led by Mr Birang, the director of the Centre for International Sci-Tech Transactions of the Iranian Vice-Presidency for Science and Technology. The Brazilian team was led by a top Brazilian official in charge of technological development and innovations.

Accordingly, Iran has introduced diverse models of cooperation with different countries, including joint committees or joint funds, and similar models can be used for cooperation with Brazil.

Birang also referred to the efforts made in recent years to develop knowledge-based companies in Iran and to use them to create a knowledge-driven economy and create jobs for university graduates. He said the two countries can share one another’s experience in those areas.

The Brazilian side, in turn, described the meeting as fruitful and said nanotechnology can be a starting point for both sides to expand their cooperation in different areas.

He also proposed a team from his country take part at an international exhibit due to be held in Tehran in 2018.

At the beginning of the meeting, the Brazilian side said Brasilia knows Iran has conducted good activities in the fields of modern technologies and knowledge-based economy. It was also stressed that the two sides can work together closely in pertinent fields.

Also addressing the gathering was Reza Asadifard, the deputy head of the Iranian Technology Development Committee for the industry and market, who presented a report on Iran’s recent accomplishments in the field of nanotechnology.

He concluded by putting forward proposals on Iran-Brazil cooperation in the field of nanotechnology.

The Tuesday meeting was attended by deputy head of Iran’s Nanotechnology Development Commission for the market industry as well as representatives of eight knowledge-based companies.

The Brazilian team also comprised representatives from most Brazilian organizations operating in the fields of science, technology and innovation.

Iran has in recent years made great progress in various scientific fields, particularly nanotechnology, in which the country ranks seventh globally.