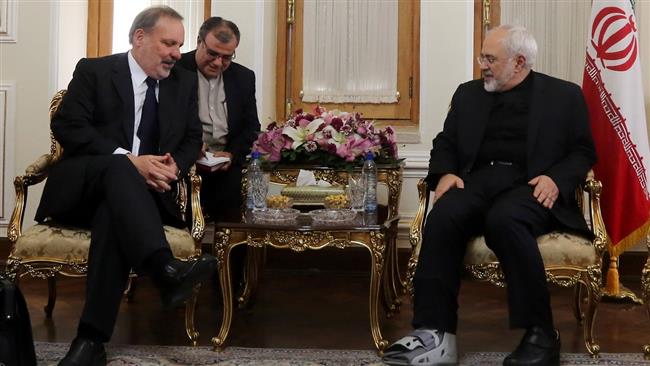 Brazil has always been among the priorities of Iran’s foreign policy, Zarif said at a meeting with the Brazilian minister of development, industry and trade.

Foreign Minister Mohammad Javad Zarif has stressed the importance of improving relations with Brazil given the country’s special position in Latin America and in the BRICS group of major emerging economies.

“This country (Brazil) has always been among the priorities of the Islamic Republic of Iran’s foreign policy,” Zarif said at a meeting with Brazilian Minister of Development, Industry and Trade Armando Monteiro in Tehran on Monday.

He added that Iran has great potential to open new markets and can help Brazil’s access to the Central Asian region.

Zarif said Tehran and Brasilia are seeking a new roadmap to develop common interests, adding that the two sides’ enterprises and banking and economic institutes can play an important role in this regard.

He added that Iran and Brazil enjoy great opportunities for strengthening cooperation in different fields such as technology, biotechnology, energy and gas.

Zarif expressed Iran’s readiness to remove obstacles in the way of banking cooperation with Brazil through constant consultation.

Monteiro said Brazil has always attached special significance to cooperation with Iran and called for promotion of mutual relations.

The Brazilian minister arrived in Tehran Monday at the head of a 35-member economic delegation to explore ways of bolstering mutual economic relations.

Strengthening relations between Tehran and Brasilia in areas such as foreign trade, energy, banking, agriculture and investment has been mentioned as the main goal of Monteiro’s Tehran visit.

Brazil is currently the world’s seventh largest economy. It is also a member of the BRICS group of emerging powers that also includes Russia, India, China, and South Africa.

Brasilia is also Tehran’s most important economic partner in Latin America and the volume of bilateral trade amounts to about $1.6 billion a year.