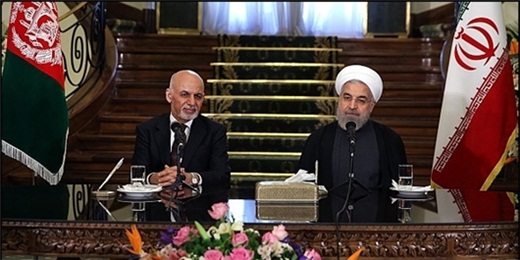 Tehran and Kabul have agreed to take measures to register all Afghan nationals now living in Iran, President Rouhani said.

“Concerning the issue of narcotics, which is a menace beleaguering the region, Iran and Afghanistan itself, we agreed to have intelligence and security cooperation to counterdrug traffickers,” Rouhani said during a joint press conference with his Afghan counterpart Mohammad Ashraf Ghani in Tehran on Sunday.

The Iranian president further noted that Tehran and Kabul agreed to share intelligence on terrorism, violence and extremism in the region, including in Afghan regions bordering Iran, and conduct joint operations if needed.

He added that talks were also held on the issue of Afghan refugees currently residing in Iran, stressing that an agreement was reached on the adoption of measures to register all Afghans now living in Iran.

Turning to the ongoing crisis in Yemen, Rouhani urged all regional countries to formulate political solutions for issues that have turned violent, and help Yemeni people to solve their own problems at the negotiating table and establish peace and calm in their crisis-hit country.

Ghani, for his part, stated that Iran and Afghanistan enjoy age-old and multi-faceted relations, and should use such opportunity to move the region away from the point of danger, and direct it toward peace, tranquility and stability.

“Today, we are facing the serious threat of terrorism, and acts of barbarism. We are witnessing civilian casualties on the daily basis. There is a need for cooperation in order to address problems such as ISIL,” the Afghan president noted.

He also expressed his gratitude to the Iranian government and nation for hosting thousands of Afghan refugees, emphasizing that a mechanism must be sought for their gradual return to Afghanistan.

Ghani also extended an invitation to his Iranian counterpart to pay an official visit to the Afghan capital.