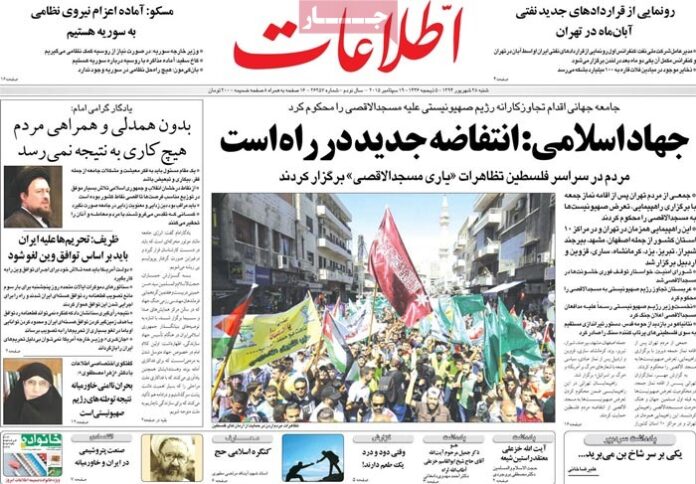 A special look at the headlines Ettela’at newspaper covered on September 19.

♦ “A new Intifada is underway,” said the Islamic Jihad.

♦ New oil contracts will be unveiled in Tehran in a conference in early November.

That conference will be followed by another one in London 1-2 months later.

♦ Moscow has said that it stands ready to send troops to Syria.

It came as the Syrian foreign minister said that his country would ask for Russian assistance if needed.

♦ The grandson of the late Imam Khomeini has said that without public contribution and cooperation nothing will produce results.

♦ “Anti-Iran sanctions should be terminated in line with the Vienna accord,” said Foreign Minister Mohammad Javad Zarif.

The Iranian top diplomat further said that the US administration should make every effort to implement the Vienna deal.

♦ Dr. Zahra Mostafavi [the daughter of the late Imam Khomeini] has said that insecurity in the Middle East stems from Zionist plots.