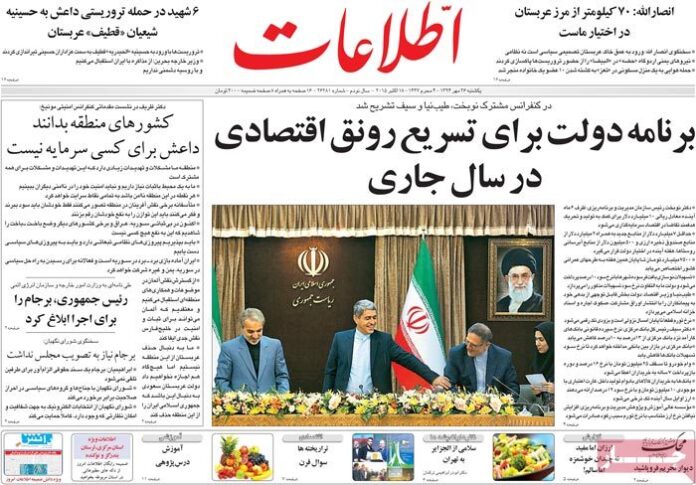 A special look at the headlines Ettela’at newspaper covered on October 18.

♦ Government plans to speed up economic growth were laid out at a joint press conference attended by the director of the Management and Planning Organization, the economy minister and the governor of the Central Bank.

♦ Ansarullah Houthis have said that they have 70 km of the Saudi border under their control.

A spokesman for Ansarullah said that the decision to push deeper into Saudi soil is political not military.

♦ Six people were martyred in an IS terrorist attack on a Shiite religious site in Saudi Arabia.

In another development, the Bahraini foreign minister said that his country welcomes talks with Iran and bears no animosity toward Russia.

♦ “Regional countries should know that IS is no asset for anyone,” the Iranian foreign minister told a Munich Security Conference Core Group Meeting in Tehran.

“We [a reference to regional countries] need a stable environment; we should not tie our security to insecurity elsewhere,” Mohammad Javad Zarif further said.

♦ In a letter to the Atomic Energy Organization and the Ministry of Foreign Affairs, the president has ordered the Joint Comprehensive Plan of Action implemented.

♦ The spokesman of the Guardian Council has said that the Joint Comprehensive Plan of Action (JCPOA) did not need the approval of parliament.

Ebrahimian further said that JCPOA is not a legally binding document for either side.