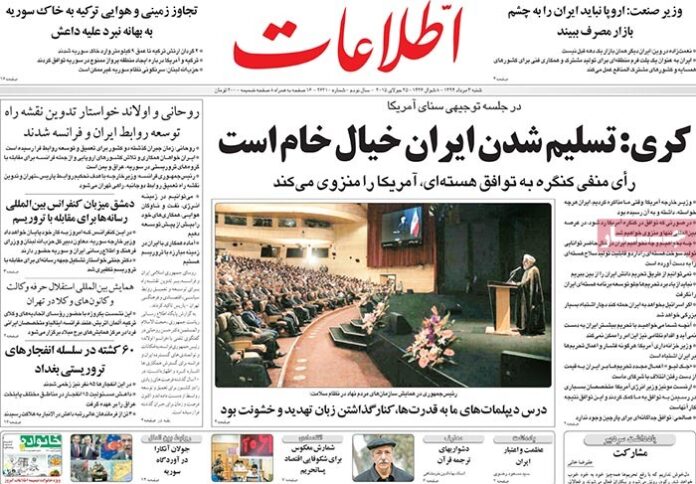 A special look at the headlines Ettela’at newspaper covered on July 25.

♦ “Some sort of unicorn arrangement involving Iran’s complete capitulation is a fantasy,” US Secretary of State John Kerry said in testimony before the Senate Foreign Relations Committee.

♦ “The lesson our diplomats taught world powers was to set aside the language of threats and violence,” President Rouhani said.

The president made the comment at a gathering of NGOs involved in the health sector.

♦ “Europe should not view Iran as a consumer market,” the industry minister said in Vienna.

Nematzadeh further said that Iran acts as a regional platform for joint production and technical cooperation between neighboring and commonwealth countries.

♦ Turkey has launched attacks, on the ground and from the air, against Syria under the pretext of fighting IS.

It came after the US and Turkey agreed to set up a no-fly zone over Syria, and Lebanon’s Hezbollah Movement said that toppling the Syrian government is impossible.

♦ Presidents Rouhani and Hollande have called for the formulation of a roadmap to promote Iran-France relations.

“The time has come for measures to make up for the past and deepen relations,” the Iranian president told his French counterpart over the phone.

♦ Damascus is playing host to an international media conference on ways of taking on terrorism.

In the gathering that comes to an end on Saturday, Iranian Minister of Culture and Islamic Guidance Ali Jannati called for the formation of a media front to counter Takfiri terrorism.

♦ Tehran is to host an international gathering on the independence of legal representation and bar associations.

Attorneys from Turkey, Germany, Austria, the Netherlands, Italy and Iran will get together in the capital’s Milad Tower for the one-day event on Sunday.

♦ A spate of explosions claimed by IS terrorists in Baghdad has left 60 people dead, and another 85 wounded.

It came as three senior commanders of the terror group were killed in Al-Anbar Province.

No limits in Western investment in power industry: Deputy minister