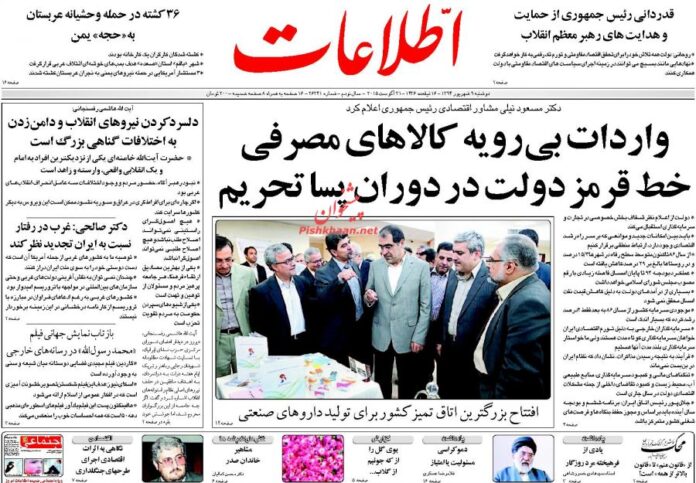 A special look at the headlines Ettela’at newspaper covered on August 31.

♦ “Limitless imports of consumer goods in the post-sanctions era are a red line for the government,” said Dr. Masoud Nili, an economic advisor to President Rouhani.

♦ President Rouhani has thanked the Supreme Leader for his support and guidelines.

The president said his administration will try its best to make resistance-based economy a reality and push inflation into single digits.

Three American advisors are said to have died in an attack by Yemeni forces on Saudi Arabia.

♦ The country’s largest cleanroom for production of industrial medicines has been inaugurated.

♦ “Dampening the enthusiasm of revolutionary forces and stoking divisions are big sins,” said the chairman of the Expediency Council.

Ayatollah Rafsanjani described Ayatollah Khamenei as one of the closest figures to the late Imam and a genuine, devout revolutionary.

♦ The director of the Atomic Energy Organization of Iran has urged the West to rethink its Iran policy.

“We urge Western countries, including the US, to extend a hand of friendship to Iran,” Ali Akbar Salehi said.

♦ Global media reaction to the screening of Iranian film Muhammad, Messenger of God.