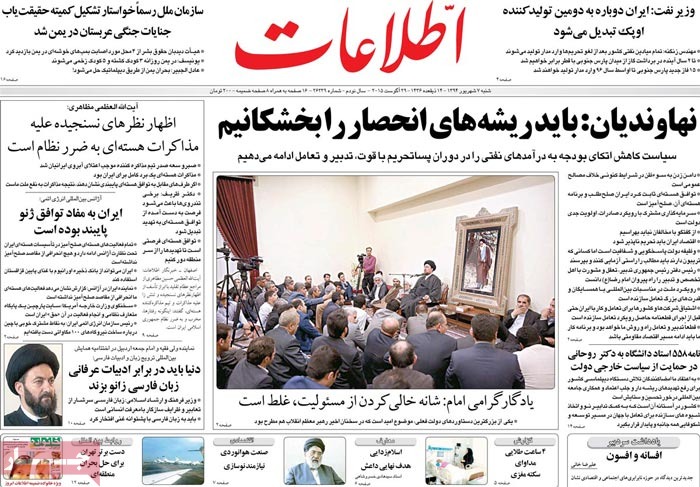 A special look at the headlines Ettela’at newspaper covered on August 29.

♦ “We need to root out monopoly,” said the chief of staff of President Rouhani.

♦ The Iranian oil minister has said that Iran will reclaim its position as the second largest producer of OPEC.

Bijan Namdar Zanganeh further said all oil fields will return to the production cycle once the sanctions are lifted.

♦ The United Nations has called for the formation of a fact-finding mission on Saudi war crimes in Yemen.

UNICEF has said that three children are killed and five others are wounded in Yemen on a daily basis.

♦ “Ill-thought-out comments against nuclear talks deal a blow to the establishment,” said Grand Ayatollah Hossein Mazaheri, a source of emulation.

He further said the patience and tolerance of the negotiating team burnished the Iranian image [on the international stage].

♦ The International Atomic Energy Agency has said that Iran has remained committed to the provisions of the Geneva Deal.

Iran’s ambassador to the UN nuclear agency said the IAEA report suggests there is no diversion in Iran’s peaceful nuclear activities.

♦ “The world needs to respect the literature of the Persian language,” the Friday prayer leader of Ardebil told a closing session of an international conference to promote Farsi.

The culture minister told the same gathering that Farsi is full of terms and delicate figures of speech compatible with human knowledge.

♦ The grandson of the late Imam Khomeini has dismissed as wrong some individuals’ failure to shoulder responsibilities.

Seyyed Hassan Khomeini further said one of the most momentous achievements of the current government is [the creation of] hope which was touched upon by the Supreme Leader in his recent comments.